As children, we rarely see our mothers as anything else but who they are to us—moms.

In the documentary feature “Merata: How Mum Decolonised the Screen,” Heperi Mita chronicles the work of the first Māori woman to write and direct a narrative feature film, his mother: the late Merata Mita. After her death in 2010, Heperi spent five years interviewing his siblings and using his skills as a film archivist to find never before seen footage of Merata. The youngest of six, Heperi never aspired to be a director himself, but felt compelled to show the public a side of his mother the world never got to see. “Merata” documents his mother’s significant work as an indigenous rights activist and trailblazing filmmaker, along with her personal struggles with unhappy romantic relationships, financial hardships and the loss of a child. Told through the eyes of her six children, “Merata” is a tender and intimate portrait of the fiery, Māori activist.

In an email interview with KORE, Heperi discussed the process behind “Merata,” which recently screened at the 69th Berlin International Film Festival.

Was there a specific moment that made you decide to make this film?
I was pushed! I cut together a 12-minute tribute video to mark the 2-year anniversary of my mother’s death. Prominent Māori actor Cliff Curtis saw the video and was starting a production company; he wanted the first project to be about my mum. He told me that if I didn’t want to direct, he wouldn’t make the film. I felt he was giving me an offer I couldn’t refuse.

Did you have a desire to go into filmmaking while seeing your mother make films?
No! As a kid I always saw how stressful it was for her.

How did you end up working as a film archivist?
There was a cache of my mother’s films that she kept in her garage. We decided to deposit her collection after she passed away and it ended up being two cargo van loads of material! The archive (Ngā Taonga Sound And Vision, then known as The New Zealand Film Archive) said they would need some help going through it all, simply due to the massive quantity, and offered me a part-time contract helping them research and sort her films. It was a dream job.

I couldn’t help but think of my own mother while watching your film. Is your perspective of your mother different now compared to what it was before?
It’s very different. She integrated the filmmaking aspects of her life into motherhood seamlessly, so travelling around the world and being on set seemed normal to me. I now realise how lucky I was! She was also really mindful of the time she would spend and put aside for me, and I didn’t comprehend at the time the number and calibre of people who were all vying for her time and attention.

Merata Mita was such a brave filmmaker, and was at the forefront of publicizing divisive issues. But, you also illustrate how she went through many battles, personally as well as professionally. Since the film documents someone so close to you, did you have any hesitations about showing a more vulnerable side of her?
The film took six years to make and most of that time was spent building the courage to actually go to some of those darker places. However, her vulnerability was the aspect of her that I was most interested in exploring. Depending on who you talk to, her reputation back home is either one of radicalism or heroism but neither of these adequately aligned with my experience of her. I wanted to show a more personal side of her.

Your mother faced so many critics and obstacles not only because she was Māori, but because she was a woman. Were you aware of the negative criticism that was happening at that time?
No, but [by] the time I was born we were living in Hollywood. She would speak at conferences and present films and seemed to be universally celebrated. I didn’t learn about how polarising she was until I started researching further into her story.

In examining the work that your mother did more closely, you mention in the film that it was a way of discovering things about her after her passing that you’re unable to ask. Are there still questions that you have today?
There are many. Some are as simple as questions around some of her unfinished work—why did she choose to let those projects fade into obscurity? Why did she continue to hold onto all that footage for so long? She was a very complex person, and there are some things about her past that remain mysterious to me, but I must say it is rewarding to try and figure out the answers for myself.

Is the final cut of the film, the film you set out to make?
I think the nature of documentary lends itself to surprises, and those surprises can take you down rabbit holes you never expected.

Was there anything else you’d like to mention about the film? Or about your mother, Merata?
It’s been really gratifying to see the success of the filmmakers that have followed in her path. From the filmmakers she mentored such as Taika Waititi and Sterlin Harjo, to those who never met her but were awarded the Merata Mita Fellowship. It’s comforting to know that her legacy lives on, not just in her family and body of work, but the filmmakers she continues to influence. 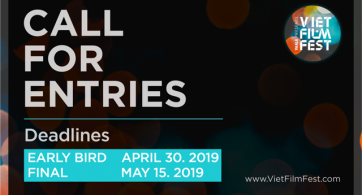 The largest international Vietnamese film festival in the world is now open for submissions. Created in 2003 by the Vietnamese American Arts & Letters Association (VAALA), the Viet Film […]