In the trailer, see Michelle Yeoh as Philippa Georgiou, USS Shenzhou captain, mentor and commander to the first officer of the titular USS Discovery (played by Sonequa Martin-Green). 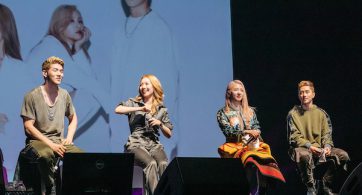 Judging by the enthusiastic crowd that gathered inside The Theatre at Ace Hotel in Downtown Los Angeles last week, you might never suspect that K-pop group K.A.R.D. has yet […]