Today, Japanese Breakfast front woman, Michelle Zauner announced that she would be releasing a book with Knopf publishing.

“Crying in H Mart” is titled after her acclaimed essay of the same name that was published in the New Yorker. The book will focus on Zauner’s experiences of losing her mother at an early age, her struggle to form an identity as a young girl and her recently discovered love for the soul-healing powers of Korean cooking. The memoir does not have a definite release date yet.

One of the most beloved artists in the indie scene, Zauner is no one-trick pony. In addition to her work as Japanese Breakfast, Zauner has also directed music videos for artists such as Charly Bliss and the Better Oblivion Community Center. She even made the music video for her own hit song, “Boyish” which made it to this year’s SXSW festival.

In the meantime, before her memoir hits bookstore shelves, catch Zauner at one of her upcoming shows: 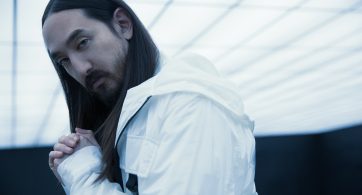 Better known for his smooth electronic beats and onstage antics, Steve Aoki is now turning literary. Today, Aoki announced that he will be dropping his memoir, “BLUE: The Color […]