Nearly 10 years ago, my very first boyfriend asked me out by recording a message on a mix CD that instructed me to meet him on the school stage the next morning. There, in front of the whole world (and by “the whole world” I actually just mean the kids in high school), he gave me my first kiss and handed me a box containing 143 folded paper hearts – which he had made during the nights we stayed up talking on the phone. Was I swooning? Yup. Was I turning a dangerous shade of red that only looks appealing on tomatoes and stop signs? You bet I was.

By the time I got home that night, I was practically exploding in giddiness as I told the story to my family. Now, I was prepared for my mom’s teasing, and I even expected my brother to throw up a little, but who could’ve foreseen my grandma’s reaction? She sighed in disapproval and mumbled something about romance being dead.

Have you ever seen a balloon deflate? That’s about the best description I have of how I felt in that moment. How could my grandma – my wise, sage grandma – think that romance was dead after the incredible day I just had?

After much prying, she finally explained that she was upset because the “rude boy” didn’t pick me up at the door on our first date, and those “scraps of paper” could never compare to roses.

I cracked a smile of relief. Of course she felt that way. This wasn’t the first time I’d been told Millennials didn’t know a thing about romance. You see, in my grandmother’s eyes, as well as many Boomers and Gen X’ers, boys these days lack chivalry, serious relationships are traded for casual “hook-ups,” and communication is only done through a computer or phone screen. Given that perspective, I completely understand why people think romance is dead.

But I’m here to let you in on a secret: Romance is alive and well. The naysayers simply don’t recognize it because they’re looking for the wrong things. Romance changes, grows and adapts. The way we show and perceive romance now may not look like it used to, but has it disappeared? Of course not. Here’s why.

Myth #1: Chivalry Is Dead
According to the old-school definition, the quintessential romantic gentleman should pay for my meal on dates, spoil me weekly with flowers and pick me up at my front door. But there’s a problem with that theory. First of all, I quite frankly don’t care how much a man spends on me. I know from firsthand experience that being a college grad drowning in student loans is no joke. So I have no intention of putting anyone through the extra pressure of paying for two if he simply can’t. Second and most importantly, it’s the 21st century. Who says I need a guy to pay for my meals?

And sure, not every guy knocks on my door to pick me up for a date, but I’m actually quite relieved when someone shoots me a text instead. Not only is texting a faster and more efficient way to get me, there’s also no need to freak out about that mess in the living room and I have time for my last touch-up in the mirror.

Believe me, I appreciate chivalry just as much as the next girl, but this does not equate to romance in my book. I know plenty of men who are still working towards financial stability and can’t afford flowers on a regular basis, but that doesn’t mean they can’t be romantic. On the other side of the spectrum, I know even more men who know everything about holding doors open and nothing about the kind of romance that gives you butterflies.

Myth #2: It’s All About Hooking Up
I won’t deny it. Our generation has mastered the art of keeping things casual, especially in college. And don’t get me wrong – I’m not trying to argue that hookup culture is romantic. I do, however, believe that fully understanding hookup culture (and why we partake in it) is important to seeing why romance is sometimes put on hold.

Hookup culture is one that encourages casual relationships and sexual encounters, while generally staying away from serious relationships. What some people don’t realize is that we keep our love life casual during the times that we need to take our career life seriously.

Decades ago, it wasn’t rare for a couple to get married right out of high school or college. Nowadays, ask someone in their mid-20s about marriage and many will say they’re nowhere near that stage of life. We live in a world of low employment opportunities, high competition and even higher stress and depression rates. Getting into college has become harder than ever and becoming financially stable after graduating is even worse. Do you really think our focus is on marriage right now?

We have not, by any means, traded romance for a culture of hookups. We’re simply making sure we mold the best versions of ourselves until we’re ready for a serious, romantic relationship.

Myth #3: Technology Killed Romance
This is simultaneously the most valid argument and yet the biggest misconception here. I say that because I can completely understand why older generations think texting, online dating and the Internet in general gets in the way of proper romance. After all, I’m sure they shake their heads at couples who spend dinner dates scrolling through Instagram instead of talking.

But I would argue that technology has actually helped make us openly romantic and sometimes extravagantly so. What are texts if not instant love letters? What is online dating if not the romantic pursuit of finding someone you may have otherwise never met? Yes, we are obsessed with taking pictures of our dates, but isn’t that just an effort to physically preserve our memories?

Men no longer are limited to dropping an engagement ring into a champagne glass. YouTube has allowed us all to see extravagant proposals using flashmobs, scavenger hunts and hidden cameras. We’re publicly displaying our love and doing so creatively and loudly. Yes, our methods are showy – another criticism we often receive – but spend an hour looking up wedding proposals online, and you’ll take back everything you said about romance being dead.

Want to learn how to play your crush’s favorite song on the guitar to serenade her? Go find a tutorial online. Want to tell her how you’re feeling but can’t find the words? Find the perfect song on YouTube. Want to get the perfect Valentine’s Day present? Check her pins on Pinterest. Want to reassure her that there’s no one else? Let everyone on your social media platforms know your heart is taken.

Flashmobs, texting and social media may not be included in the traditional definition of romance, but if my guy posts that embarrassing picture of us just because he knows I love it, then that sure counts for me.
Feature image courtesy of dailybruin.com
This story was originally published in our Spring 2015 issue. Get your copy here. 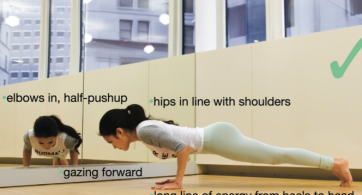 A chaturanga dandasana, the Sanskrit term for “four-limbed staff pose,” is typically done 15 to 20 times in a classic 60-minute Vinyasa class. It’s a pose that energizes and […]