After legends shredded the halfpipe in the X-Games, which began in 1995, the popularity of street skateboarding followed. For three kids out in the Rust Belt town of Rockford, Illinois, skateboarding became more than a way to “stick it to the man” — it was a way of life and, sometimes, an escape from it.

“Minding the Gap” documents director Bing Liu, along with friends Zach and Keire, as they work to navigate the tenuous line between children and their parents and between discipline and abuse. In reconciling with the demons of their past and present, they find that the “gap” between childhood and adulthood might be bigger than originally thought. We follow Zach as he becomes a father, Keire as he grapples with identity and his complex relationship with his now-deceased father and Liu, who confronts his mother and old “family secrets” kept in the dark.

The film, which premiered at Sundance Film Festival earlier this year, was acquired by Hulu for theatrical and streaming release on August 17.

Bing Liu was born in China, but grew up in Rockford, Illinois, where he met Zach and Keire. At around the age of 12, he began filming the skateboarding exploits of his friends and making short films which later “snowballed” into the creation of “Minding the Gap” in collaboration with Kartemquin Films. Liu also was the story director and director of photography for the Steve James mini-series “America to Me,” released earlier this year. We spoke with Liu in May about the film.

You’re in the action here instead of distanced from everything. How or why did you decide to include your own parts?

I always knew I would have an act in the story, especially with how I play the film’s character. They’re interacting with everyone and going around to show something on camera that I related to. Over time, I slowly entered the film as a character, I didn’t go out intending to put myself out there in the way that I did in the end. There was a process to help with me entering it in a way that felt like it was justified to the story, because I didn’t want to make a personal doc. I feel like traditional docs miss the filmmaker’s opportunity to capture the captivation of the objective story. I believe that, while making the film especially, we believe the story was affected by the camera. The question is how, though; how he enters the story with his own arc.

This is your directorial debut. How are you handling the response to the film?

I’m very grateful and appreciative. I’m grateful that people latched onto it and really liked the film.

“Minding the Gap” obviously treads on very serious topics and discussions of toxic masculinity, abuse and neglect. Have you received any comments in how it’s handled?

I’ve received a few compliments, yeah. When people talk about it, they’re usually swallowed by the sensitivity by which its handled. Domestic violence, we’re up against this paradoxical thing beyond making a film about it. Society wants to perceive talking about it as bad, but we also value privacy to keeping families behind closed doors and not talking about it.

We have to oppose that mentality. You have to tread carefully and try to find new ways to get at it in a truthful way. So that’s what I did in the film, and that’s partly why I entered the film more and more, because I needed to. I needed to sort of analyze how the filmmaking was handling it throughout the film. If anything, I feel that the issue is that people are frustrated with the fact that the issue is resolved, that kind of feeling spills over into frustration. The film shows that it’s not an issue of if it’s right or wrong, it is what it is.

What was your favorite part about filming? Biggest challenge?

I guess my favorite part of filmmaking was training myself to film skateboarding in a way I hadn’t seen done before. I really liked trying that, personally. I think the most challenging thing was dealing with domestic violence, especially between two characters in the film.

How do you feel the film resonates with Asian American audiences?

I was in Poland for an film awards festival and we won three awards at the festival and people were so responsive. They came up afterwards and there’s so much depression and family violence within society and no one is talking about it, even when they’re grappling with it. Issues of family violence are universal around the world, especially being a young person in the world and growing up and learning how to fend for yourself. Certainly, in Asian American communities, violence is not talked about. It’s dismissed. It’s seen as shameful. It’s in many ways beneath the surface.

That was certainly the case with my mom and my story and the immigrant stories of domestic violence with a white partner. That’s very common as well. In terms of Asian American men, this being open, emotionally vulnerable — there’s not a lot of representation for how to do that in media.

What do you want people to take away from watching “Minding the Gap”?

This person came up to me one day. He ended up wanting to talk outside. He left the festival and went home to his pregnant wife and she said, “How was the film?” And he said, “It was great, but I need to start breaking down why my father was abusive and I forgot that you can slip into that if you’re not careful. That film sort of made me realize that how they can be abusive to their child.” That day, he wrote an article about that and posted about it. The next day, his child was born. The article ended with a picture of him and his wife and their baby with the story of how we met and how I taught him how to not be abusive as well. That’s an example of one of the impacts the film has had.

What’s your advice for the aspiring director?

I think everybody has at least one film that they want to make and what story they want to tell. Remember that when you think about what kind of story is it that you want to tell. Nowadays, the average time to make a documentary is five years. There’s a lot of rejection and working with a limited amount of resources and funding in documentaries these days. You want to be sure because it may take four years just to get the funding. You want to make sure you’re doing a project that is telling a story that matters more to you than making a film to make money, especially for your first film. 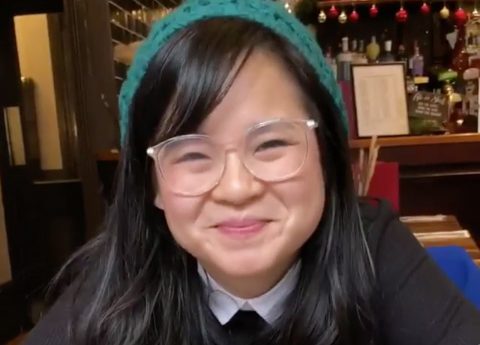