Mindy Kaling wants the young girls who see her on screen to ask themselves one question: “Why not me?”

Kaling, who is an actress, comedian, writer and producer, is one of Hollywood’s most visible multi-hyphenates. Her latest film role in the upcoming “Ocean’s 8” as Amita, a jeweler who joins an all-female team of heist experts who plot to take a $150 million diamond necklace from the Met Gala, pairs her with Sandra Bullock (playing Debbie Ocean, sister to Danny from the original franchise), Cate Blanchett (Lou), Anne Hathaway (Daphne), Helena Bonham Carter (Rose), Sarah Paulson (Tammy), Rihanna (Nine Ball) and Awkwafina (Constance).

It’s little wonder Amita is driven toward the excitement and riches offered by Debbie Ocean’s team. She lives and works with jewelry alongside her nagging mother, a frustrating existence in the shadow of her older married sister.

“My family is completely different, so that was fun to play,” Kaling said in an email interview. In the film, Amita speaks Hindi to her mother. Kaling, who grew up speaking only English in Massachusetts, had to learn the language for the scene. Her parents are both Indian immigrants, but from different regions, meaning her mother speaks Bengali, and her father Tamil. “I luckily did not share those issues with her, though I have friends who have.”

More than anything, she wanted to show that Asian American women aren’t “all obedient, shy ‘good girls’” through Amita, Kaling said.

Kaling got her start at a diversity writing program at NBC, where she began development for “The Mindy Project.” She pointed to the importance of behind-the-camera inclusion initiatives at networks, including ones that subsidize the salaries of first-year writers of color. “I wish every network did that,” she said. “It’s so helpful when hiring people, and guarantees an inclusive writers’ room.”

Post-“The Mindy Project,” the six-season series that in 2012 became the first television show created by and starring an Indian American female, Kaling has worked nonstop. This year alone, she appeared in Disney’s “A Wrinkle in Time,” launched the NBC comedy series “Champions,” and co-produced, written and starred in “Late Night,” a film led by Emma Thompson. She’s also working on more television projects with NBC and Hulu, including an adaptation of the cult rom-com “Four Weddings and a Funeral.”

“My driving force right now is representation for under-seen people in movies and TV that are pushing the needle forward,” Kaling said. 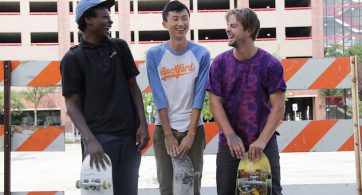 After legends shredded the halfpipe in the X-Games, which began in 1995, the popularity of street skateboarding followed. For three kids out in the Rust Belt town of Rockford, […]