Their voices are distinct, each representing a facet of their disparate worlds. They exercise their writing chops online, providing glimpses of their lives through a window that show intimate details and thoughts on endless topics including sex, racism, food and parenting.

But together, they make up an ever-growing circle of savvy Korean American bloggers who have generated buzz and developed cyber-cred among millions of others maintaining an online diary.

They write with honesty and gusto, unencumbered by journalistic standards, and garner attention from thousands of Web surfers — some anonymous, some loyal, most curious.

“You just think you’re going to put your opinions somewhere, get it out. It can be attention-grabbing if people respond, reply, cross-list. That’s the whole dynamic of interactive and peer-driven media,” says Peter Krapp, a film and media studies professor at University of California-Irvine who has studied the blogging phenomenon.

“If they are an interesting, unorthodox, witty or disrespectful voice in a particular context, it might be nice to get a blog from them,” Krapp adds.

That’s exactly what makes these bloggers break rank from the others and garner a nod from their own peers.

“These are opinions; nothing more, nothing less.”

Phil Yu senses a hint of disappointment when people meet him and realize he’s not as angry as they expect.

“I’m generally a nice, reasonable guy, I think,” says Yu, a 28-year-old Los Angeles resident who runs angryasianman.com. “The Web site is my persona, perhaps one I get to be outside of real life.”

The blog, launched in February 2001, started as a place for Yu to rant about issues surrounding Asian American politics, identity and representation in the media and pop culture. Yu, who works on Web content stuff by day, says there was no defining moment in his life that spurred him to write about those topics.

He didn’t grow up an Asian American activist, he says. He didn’t gain that perspective in college where most do. In a way, writing about certain topics pertaining to Asian Americans made him inadvertently more conscious of what was out there.

“It wasn’t anything like that. It was a gradual understanding of issues that were happening around me and observing the media,” says Yu, a self-proclaimed pop-culture junkie.

His entries started off being tongue-in-cheek, an exaggerated look at some of the things he felt compelled to write about. But the undercurrent was undoubtedly clear: that racism and stereotypes exist. What makes Yu different from others is that he isn’t afraid to point it all out. And he infuses it with a touch of humor and realism to which readers can relate.

“Lately, it’s when I see ad campaigns that rely on those really basic stereotypes that you would’ve thought we got over a long time ago,” he says. “It’s like, why would you think that was innovative or creative to sell the products? It really shows we’ve not made any progress.”

Yu’s site, which attracts about 200,000 viewers each month, now has a cult following from a loyal and quickly growing audience. Readers link his posts to other blogs. They send him articles that may be fodder for his site.

“I used to be happy when I would get 10 visitors a day,” Yu says. “I didn’t intend for an audience. The audience found me.”

“This blog will essentially be about my experiences as a new father. But of course, I’ve never met a microphone I didn’t like.”

Pierre Kim’s topic of choice isn’t as racy as others, but blogging about being a father and parenting is common ground for many and an outlet for fathers who have trouble finding blogs that cater to them.

Kim says he started freaking out about being a father three years ago, just before his daughter was born. It hit him hard. His previous lifestyle with his wife revolved around selfish luxury, traveling and going out. Having a baby was a drastic change, and he caught himself wondering how he was going to pay for his unborn child’s college, about his daughter’s future boyfriends.

“I can’t be the only guy thinking about this,” he thought.

He turned to the Internet for reassuring words, but most of the blogs were centered on the experiences of women and their parenting woes. He decided to start one of his own, metrodad.com. It would be a creative outlet for writing and a place he could vent.

“I joked that I do it because it’s cheaper than therapy,” says Kim, 38, who lives in New York City with his daughter and wife, a successful fashion executive.

Kim says he never promoted his online journal. Somehow, moms, dads and 20-somethings discovered his humorous anecdotes and it began to get passed around.

Kim hit a nerve with readers and also found his niche: writing about being a father of a little girl who is trying to balance his marriage and social life, all with a mix of hilarity and honesty.

Take this entry, dated Feb. 28, 2007: “Your child’s memory will amaze you. Things you said months ago when she was a little infant will now come back to haunt you. For example, this morning, you will be speaking to a matronly woman in the lobby of your building and her shoe will squeak on the rubber mat. Your innocent little child (who has been shyly clinging to your leg in total silence for 10 minutes) will suddenly look up alertly and yell, ‘WHO FART, DADDY?’”

Kim says he’ll show his blog entries to his daughter one day.

“We’re just a community of mothers writing about Korean identity, race, culture, and parenting. Please keep your comments respectful and on-topic … or fear the wrath of the Korean mother-in-law.”

Stefania Pomponi Butler and six other mothers who are Korean or have a Korean child found their niche a year ago.

“There was absolutely no voice out there for Koreans or half-Koreans. There was no parenting voice for those women. When people find that niche, that community, it just grows. Over the year, it just exploded,” Butler says.

Butler, a 37-year-old mother of two who lives in the Bay Area, is the more experienced blogger of the group. She’s a writer and editor who maintains a personal blog and contributes to four other sites.

Butler — a stay-at-home turned work-at-home mom — wanted to read more about being a parent. She turned to blogs because they were written honestly by real people. She felt less isolated and connected to a community of people to whom she could relate.

Kimchi Mamas, made up of various Korean American experiences is, in some way, a collective voice to moms balancing culture, identity and race. The blog garners more than 24,000 page views a month, Butler says, and attracts an audience seeking similar parenting experiences.

“We are bold. Strong opinions are absolutely encouraged in everything we post … We can play off the fact that Koreans are opinioned and hot.”

Like Pierre Kim, Butler says she’ll show her daughters her blog entries when they get older. Unlike journaling or keeping a diary, having a blog means you have an audience, and are perhaps more likely to write. Which means Butler’s kids will end up with a lengthy read. “Through it all, I hope they see how much I love them,” she says. “It’s a chance to be real and honest. It’s a testament to my love for them.”

At the same time, Butler says the wide audience for favored blogs is a way to counter how Asian Americans are portrayed in the media.

“Asians are multi-dimensional. We’re funny. We’re irreverent. And we’re just like everyone else,” she says. 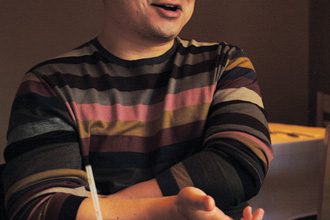 By Corina Knoll Photographs by Eric Sueyoshi Rex Lee plays “Lloyd,” assistant to Jeremy Piven’s “Ari” on “Entourage.” It’s Tuesday, just after 2 p.m. and the backdrop is Cravings, a […]