Nahnatchka Khan is confirmed as director for Randall Park and Ali Wong’s unnamed Netflix original, according to Variety.

This will be Khan’s directorial feature debut. She’s best known for executive producing ABC’s “Fresh Off the Boat,” which recently concluded its fourth season, and for creating “Don’t Trust the B—- in Apartment 23.”

Wong and Park will play lead characters Sasha, a celebrity chef, and Marcus, a happy but struggling musician. The pair are co-writing the script with Michael Golamco, who worked with Park on “Dragon of Love” and “The Achievers.”

The romantic comedy focuses on childhood sweethearts Sasha and Marcus, who had a falling out 15 years ago. The film is set in San Francisco, where they end up reconnecting by chance and reigniting their romance.

Park is known best for his role on “Fresh Off the Boat” as Louis Huang. His other acting credits include playing North Korean leader Kim Jong-un in the film “The Interview” in 2014. Wong, who rose to fame through her Netflix stand-up comedy special “Baby Cobra,” has made appearances on “The Tonight Show,” “Are You There, Chelsea?” and “Inside Amy Schumer,” and can currently be seen in ABC’s “American Housewife.”

Filming is scheduled to begin in May. 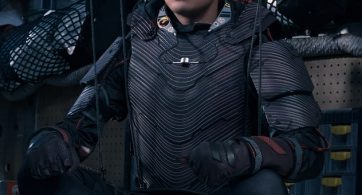 When it comes to Hollywood debuts, nothing gets quite as big as a Steven Spielberg action flick. That’s good news for Win Morisaki, a young actor and singer who […]