Sometimes, everything that glitters is gold.

Today, Jan. 25, Netflix launched their Golden social media channels on Instagram and Twitter. Similar to pages like Strong Black Lead and Con Todo, which respectively elevate Black and Latinx talent, Golden highlights pan-Asian creatives both off-screen and in front of the camera at Netflix. The channels will also present episodes of original social media series like “Spill the Boba Tea,” which originally premiered on the Still Watching Netflix YouTube channel last summer. Hosted by Wong Fu Productions’ Phil Wang, the next episode will feature “Emily in Paris” star Ashley Park and will drop on Jan. 27.

According to press statements from Netflix, the name Golden was inspired by a dedication to letting global Asian stories shine. “We have so many more wonderful, nuanced stories to tell,” Netflix’s vice president of editorial and publishing, Michelle Lee, told The Hollywood Reporter. “We know the audience is there, and truly the purpose of Golden is to be that platform to celebrate and champion our community.”

To accompany the Golden launch this morning, Netflix also released videos with Asian creatives like Ken Jeong, Momona Tamada, Tan France, Marie Kondo and many more welcoming audiences to the channel. Make sure to follow @NetflixGolden for more! 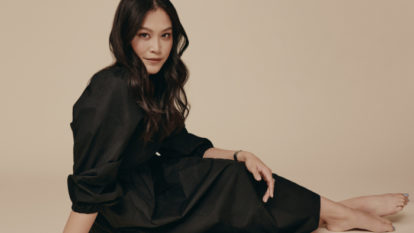 Actress Dianne Doan might be warm in real life, but she’s bringing the heat on “Warrior.”