The Wall Street Journal recently revealed that the creator of the Kogi truck, Roy Choi, has decided to trade in his wheels for a more stationary setup. His West Los Angeles restaurant won’t be serving the usual Korean-Mexican fare of his trucks, but a whole new menu based on “updating the rice bowl.” I don’t particularly know what this means, but he promises low prices and the same kind of novelty and attention to detail of his past projects.

There’s a large amount of hype surrounding this place and I’m probably going to be one of the many all too eager people camping out on its door steps till opening day, but its ultimate success is somewhat unknown. The meteoric popularity of the Kogi trucks can be partly due to its somewhat underground appeal. In its early days, Angelinos often posted their sightings of the Kogi truck on Facebook or Twitter due to its seemingly obscure existence. Even its rise coincided with the creation of Twitter where its ever changing location was tweeted to its loyal followers. The idea that only people in the know dined at Kogi was a great pull. The trucks have survived the hype, will the restaurant? DUN DUN DUN! 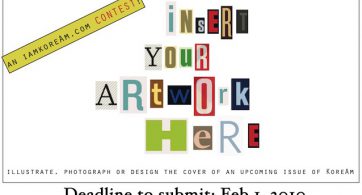 Just a friendly reminder: the deadline to submit your art for charactermedia.com’s second contest, themed Generation 3, is just 20 days away!!! So pick up your drawing pens, brushes, […]