According to the casting call, The Drop is “a mashup of Glee and the Korean Pop aesthetic.” Set in an international boarding school with a performance arts program, the series follows three teenage girls who meet as strangers and befriend each other after discovering their shared “sensibility for the K-pop vibe.”

In a nutshell, it’s pretty much an American remake of Dream High.

Cannon, who is also the series’ co-creator, will be co-executive producing the DHX Media project alongside Tommy Lynch and Steven DeNure. No casting announcements have been made yet, but filming has been scheduled for early December to mid-March 2015. The current episode order for the series is 20 episodes, which will be filmed in Toronto. The show will most likely air on the Nickelodeon network as Cannon is the chairman of TeenNick.

Here are the descriptions of the show’s four main characters:

SUN HI, Female, 14 – 16 yrs
Killer singer! Sun Hi is funky and free-spirited. She’s a dreamer and has huge life aspirations. She wants to be a pop star, she wants to fall in love, and she wants to star in movies… she wants, and wants, and wants! As a performer, Sun Hi is creative and open-minded. She’s always wiling to try new things in her songs, choreography and staging. We love her because her energy is high and because she is willing to take risks to follow her dream. We laugh with her because her ambition is often misguided and gets her into trouble.

JODI, Female, 14 – 16 yrs
Jodi was brought up in New York. She is loud and proud. Jodi is the fashionista of the group. She will keep her crew on the cutting edge of hip. Jodi can sing and dance, but her training is minimal. It’s all street informed. Hip hop dance moves and rap music are areas she’s comfortable in.

CORKI, Female, 14 – 16 yrs
Corki is the wealthy only child to a Korean business tycoon. Corki is familiar with boarding schools as she has spent her life in them. Corki is a little aloof. Her comedy comes from her super rich upbringing. We love her because she really is innocent about how the rest of the world lives. Corki is under constant pressure from her father to do well in school. Her father sees K-pop as frivolous, unlike ballet and the violin, in which his daughter has trained and excelled. Her classical ballet training will become an emotional counterpoint in her stories as she fuses ballet with Jodi’s Hip Hop style. Corki sings well and rocks the violin, once she loosens up.

CALEB, Male, 14 – 16 yrs
A dancer and singer, Caleb is obsessed with K-pop culture. He knows every band, every song, every star. He believes it to be the next big cultural thing and wants to be part of it. Caleb often has a difficult time concentrating. He was sent to boarding school because he was falling behind in his town school. In reality, Caleb’s trouble paying attention comes from his high intellect. Caleb is a genius. He’s a brilliant songwriter/producer. Caleb thinks faster than others, but he can get so far ahead of himself that he often forgets where he is going.

This is not the first time Cannon has supported a K-pop project. In 2012, Cannon’s production company NCredible collaborated with JYP Entertainment to produce a TV movie featuring the Wonder Girls, which premiered on the TeenNick channel. 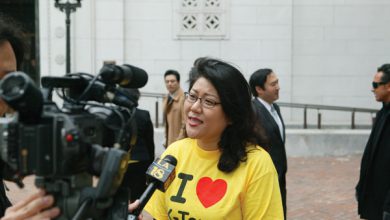 Above photo: Grace Yoo, executive director of the Korean American Coalition in Los Angeles. “Who killed Koreatown?” is a campaign to support the federal lawsuit against the wrongs perpetrated […]