Nickelodeon has announced that it will premiere its musical comedy Make It Pop, which stars K-pop star Megan Lee, on April 6 at 7 p.m. The channel will also air a special preview of the sitcom on Thursday, March 26.

Co-created by Nick Cannon and Thomas W. Lynch, Make It Pop follows the story of three teen girls who meet as roommates at an international boarding school and later form the K-pop inspired band XO-IQ. Megan Lee will be portraying Sun Hi, a social media maven and aspiring pop star.

The show has been receiving a mixed response from K-pop fans, as there have been some confusion on whether the show is actually about K-pop or just capitalizing on K-pop trends, such as crayon-colored streaked hair and flamboyant costumes.

“A lot of people have misunderstood that this show is about or based on K-pop but actually it’s not,” Lee said in an interview with BTS Celebs. “We say that the show is K-pop inspired because some of the styles of hair clothes and make up that we apply to the show by looking at girl groups like f(x), Girls Generation, 2ne1, 4minute, etc.”

Despite Lee’s clarification, Hallyu enthusiasts are still concerned about the representation of K-pop on Nickelodeon. In 2012, Nick Cannon produced a TV film starring the Wonder Girls before “Gangnam Style” went viral, and the film tanked. Thus, fans have expressed their doubts about the show succeeding.

Make It Pop has also been criticized for the lack of Asian male leads. During an industry panel, a journalist asked one of show’s producers if an Asian male character will be included in the cast. In response, the producer joked, “Nope! Never! Asian guys in my show, not gonna happen!”

“The producer [then] began to answer the question seriously and said he was hoping to get Psy to play the father of the main Korean girl,” the journalist wrote in a scathing op-ed piece on AsAm News. “Only white guys are in the show as the love interest for Asian girls.”

However, the series’ creators and production company, DHX Media, are confident that the musical comedy will be a success.

“Tom and Nick have created a standout and up-to-the-minute series with a beating musical heart and unbridled energy, style and humour,” Steven DeNure, President of DHX Media, said in a press release. “High-school shenanigans have never before been this spirited and comical. Make It Pop has all the ingredients to be a success.”

You can watch the trailer for Make It Pop below: 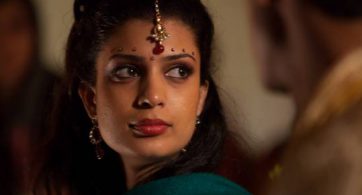 Check out what actress Tina Desai has to say about reuniting with her esteemed cast members, taking on a bigger role in the film and traveling around the world […]