I called my parents a few nights ago to tell them to be cautious when stepping out of the house, because they might be targets of verbal or even physical abuse. It felt so strange. Our roles had flipped.

My plea mirrored the admonitions I received from them as a child growing up in Houston. The world, they cautioned, was hostile and it viewed us as strangers. So they warned me to stick close to my family. Close to my kind.

The fact that the coronavirus seems to have originated in China has spawned a slew of anti-Asian hate crimes. Across the country, Asian American parents and children are making versions of the call I made. Friends are sharing first-hand accounts of abuse on text chains and circulating articles on Facebook, always ending with the suddenly ominous “stay safe.”

Growing up, the assumption was that once we became American enough, there would be no need for such warnings—that we would be safe. To that end, my parents encouraged me and my younger brother to watch as much television as possible, so that we might learn to speak and act like the natives. The hope was that race would not disadvantage us—the next generation—if we played our cards right.

When I became an actor (maybe as a result of all that TV), and really started to work, I felt glimmers of my parents’ hope coming to fruition—doors were open, strangers were kinder. In some ways, I began to lead a life devoid of race. But I’ve learned that a moment always comes along to remind you that your race defines you above all else.

It might be a small moment, like a salesperson greeting you with “konnichiwa.” Or it might be a string of moments, like the press tour that Kal Penn and I took to promote “Harold & Kumar Go to White Castle” in 2004, a few years after 9/11.

We flew across the country—New York, Chicago, Atlanta, Seattle—and it became a grim routine: Flight after flight, Kal would be pulled aside for a “random” search. On one leg of the tour, Kal’s friend Gabe joined us, and when we hit security, Kal was selected for a search while Gabe and I flew through unscathed. We gathered our bags and waited on a bench for Kal to be released. Rummaging through his backpack, Gabe suddenly said, “Kal’s going to be annoyed.” When I looked inside it, I realized why: Gabe, who is white, had gone camping recently, and had neglected to remove his Rambo-sized hunting knife from his backpack.

I gasped and looked back at Kal, who was watching a Transportation Security Administration worker empty the contents of his bag. It was a reality check.

Asian Americans are experiencing such a moment right now. The pandemic is reminding us that our belonging is conditional. One moment we are Americans, the next we are all foreigners, who “brought” the virus here.

Like fame, the “model minority” myth can provide the illusion of “raceless-ness.” Putting select Asians on a pedestal silences those who question systemic injustice. Our supposed success is used as proof that the system works—and if it doesn’t work for you, it must be your fault.

Never mind that 12 percent of us are living below the poverty line. The model minority myth helps maintain a status quo that works against people of all colors.

But perhaps the most insidious effect of this myth is that it silences us. It seduces Asian Americans and recruits us to act on its behalf. It converts our parents, who in turn, encourage us to accept it. It makes you feel protected, that you’re passing as one of the good ones.

And because the stereotypes may be complimentary (hardworking, good at math), it makes people—including us—think that anti-Asian sentiment is somehow less serious, that it’s racism lite. That allows us to dismiss the current wave of Asian hate crimes as trivial, isolated and unimportant. Consider the comedians who mock Asians, but restrain themselves when it comes to other groups.

Of course, with the falsely positive come the negative stereotypes (you’re sneaky, you’re stealing jobs, you’re corrupt). After I had been busted for cheating on a Latin quiz in high school, I recall my teacher asking, “Why are Koreans such cheaters?”

During times of national stress, it’s these darker stereotypes that prevail. My wife’s families were incarcerated in camps during World War II, even while her great-uncles were serving in an all-Japanese American battalion of the U.S. Army. Vincent Chin, a Chinese American autoworker, was brutally beaten to death in Detroit in 1982, blamed for the Japanese “takeover” of the auto industry. And just recently, an Asian woman in Brooklyn had acid thrown at her while she was taking out the trash, another among the skyrocketing attacks against Asians.

I came to this country in 1978, at the age of 6. I was naturalized on Nov. 21, 1990, during the military buildup before the start of the Gulf War. I remember being surprised by the judge at the ceremony asking me whether I would defend my country in uniform if called upon. I wasn’t expecting that question, though my friends and I had been wondering about a possible draft, and I took my time to truly consider it. I answered yes and I meant it.

I claimed the citizenship my parents wanted for me and I think I’ve spent my life earning it. I’m not going to let anyone tell me or anyone who looks like me that we are not really American.

If the coronavirus has taught us anything, it’s that the solution to a widespread problem cannot be patchwork. Never has our interconnectedness and our reliance on each other been plainer.

This story originally appeared in the “Los Angeles Times” and was first published online April 22, 2020. This article is reprinted here with the author’s permission. 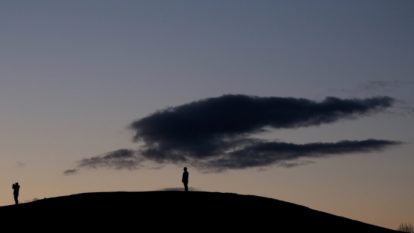 Eight weeks ago, we lived in a different world. In that world, we whizzed about without much thought to our surroundings. We climbed into Ubers, celebrated birthdays with loved […]