Eight weeks ago, we lived in a different world. In that world, we whizzed about without much thought to our surroundings. We climbed into Ubers, celebrated birthdays with loved ones, squeezed into stadiums to watch our teams compete and we brazenly grabbed door knobs.

Our lives today are a dramatic contrast to what they were just weeks ago. Sheltered at home, those who can afford to are working from their couch, home office or bed. But more than 26 million have filed for unemployment, and humanity faces an uncertain future. Will schools remain closed for the rest of the year? How do we gather safely for worship or entertainment? When will there be enough toilet paper?

What the pandemic has unintentionally caused us to do is to look at our current lifestyles through a magnifying lens, in a way that no other event has asked of us in decades. Urban cities are densely packed, making avoiding close contact with people almost impossible. A simple task like taking the subway or getting coffee is no longer safe without a long list of precautionary to-dos.

Now that human life is undergoing massive upheaval, the environment is also experiencing phenomenal changes, calling attention to how integrated our typically bustling lives are with nature. With factories, industries and offices shut, this unforeseen change on a global scale has given scientists a unique opportunity to make observations about our relationship with the environment. NASA and the European Space Agency (ESA) have observed reductions in environmental contaminants after lockdowns were implemented in some countries. “The reduction in emissions that we can see coincides with the lockdown in Italy, causing less traffic and industrial activities,” said Claus Zehner, ESA’s Copernicus Sentinel-5P mission manager, in a press statement.

It might be only temporary, but even so, it’s hard to ignore the signs of nature healing itself in the absence of constant human intervention. Air and noise pollution have dropped dramatically over the past few months. As people remain locked indoors, wild animals are curiously exploring parks and quiet neighborhoods in some parts of the world. Articles in the “New York Times” and CNET offer glimpses of whales breaching closer to shore due to the decrease in human activity, Venetian canals flowing with clear water and deer wandering through the streets of Nara, Japan. The natural world is breathing freely.

But experts warn against taking these incidents as positive steps in the fight against climate change. The impermanence of the change suggests things will go back to normal once the pandemic subsides. In fact, there might even be a surge in environmental damage when “normal life” resumes. It’s hard to predict exactly what will happen. This is the first of its kind, and we are living in the experiment.

As a species, we have been increasingly eager to explore the world around us. From Christopher Columbus to Buzz Aldrin, we’ve always been curious and hungry for new conquests and adventures. In doing so, we compacted the world, making every corner easily accessible through the purchase of a ticket on an already overworked credit card. These networks that flew us to Milan for fashion week or took us to see the Great Wall of China are the very same networks that the virus now travels to our home. Perhaps 50 years ago, the same virus might have taken twice as long to reach the United States, and maybe we would have had more time to defend ourselves. But it’s important to understand that our current situation is a result of our fast-paced, urban lifestyles, and it goes without saying that blame for the pandemic doesn’t lie with any single country or ethnicity.

Prior to the lockdown, consumer spending in the United States was the highest it has ever been, at $13.4 trillion for 2019 according to reports by Trading Economics. This pandemic has taught Americans the hard way that the supply chains created by our high demands for food, clothing, makeup and technology come at a cost. Some might find it hard to connect their own day-to-day lifestyles to the root causes of the novel coronavirus, but the reason it’s affected more than two million people worldwide is largely because of the increased interconnectivity of our lives.

While we wait out the storm and distract ourselves with Zoom meetings and virtual happy hours, it’s crucial that we come out of this with the self-awareness to prevent something similar from happening in the future. But it’s equally important to put empathy into practice, to help each other heal rather than finding fault, and to set an example for future generations. The question we should be asking now isn’t “When will it end,” but “How can we learn from this?” 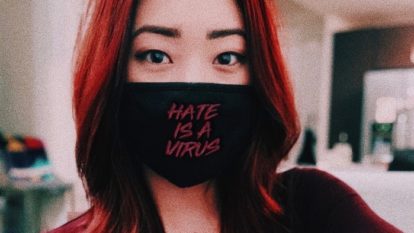 As COVID-19 fear and strain engulf the country, Asian Americans are faced with a different kind of threat: racially motivated assault and harassment. Hate crimes against Asian Americans—Chinese Americans […]