Oscar nominations are in, and by the looks of it, the Academy of Motion Picture Arts and Sciences are loving “Lion,” which received a Best Picture nod and another for Dev Patel, in the Supporting Actor category.

Patel, an Indian English actor who first rose to fame in 2008 in “Slumdog Millionaire,” has been nominated for several awards — including a Golden Globe and a SAG Award — for his portrayal of Saroo Brierley in “Lion.”

The pic, directed by Garth Davis, features a multi-cultural cast and tells a story of home and family through the eyes of a five-year-old Indian boy who is adopted by an Australian couple. 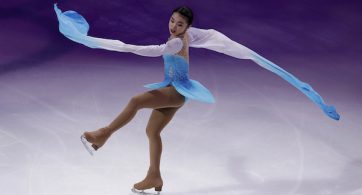 If you haven’t yet heard of Nathan Chen, Karen Chen, or Maia and Alex Shibutani, brace yourself, because you’ll likely be seeing their names covering headlines come 2018, in […]