If you haven’t yet heard of Nathan Chen, Karen Chen, or Maia and Alex Shibutani, brace yourself, because you’ll likely be seeing their names covering headlines come 2018, in Pyeongchang for the Winter Olympics.

In Kansas City this past weekend, the two 17-year-old Chens (who are not related) won the men’s and women’s gold medals at the U.S. Figure Skating Championships, while the Shibutani duo took top place as the country’s ice dance winners.

All four are now pegged as strong contenders for the U.S. winter Olympics team, members for which will be chosen after next year’s championships.

Annnd 2017 Nationals is over! Congrats to all the competitors, and thank you all for the support and energy given to us throughout the week!! #uschamps17

Nathan Chen ended with 106.39 points in the short and 212.08 in the free skate, becoming the youngest U.S. men’s champion in more than five decades.

He told Team USA that he believes “it’s possible” that he could be the 2018 Olympic champion: “It’s something that’s still in the distance for me, and there’s so much room I have to improve to make it to that level. But I think it’s definitely possible.”

On the women’s side, Karen Chen, who took home championship bronze two years ago, toppled Ashley Wagner with skates to “On Golden Pond” and “Jealousy Tango,” earning a record-setting 72.82 in the short program and a 141.40 in the free skate.

It still seems so unreal that my dreams became a reality this week! I’m so thankful for all the people who had helped make this all possible! I still have a lot to learn and a lot of room to grow, so I will keep working hard and hopefully the new dreams of mine will prosper and become a reality in the near future. #USChamps17

Karen Chen is from Fremont, California. She told Team USA that she is “in complete shock” at her win. “Confidence has been one of those things I’ve struggled with a lot. I’ve always had a lot of self-doubt, and going into nationals, I focused on the things I can control and stopped worrying about all the distractions. I was able to stay really focused and do what I came here to do.”

The Shibutanis, who placed second place at the championships last year, and who won the 2016 Four Continents Championships, came out on top with 200.05 points, and broke the record for points for the short dance program. 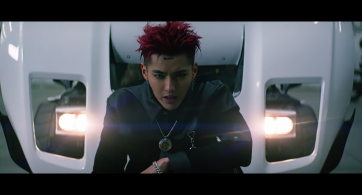 Look out Rich Chigga: fellow hip-hop rapper, Kris Wu, is making moves in the U.S. with the debut of his music video “Juice.” The K-Pop star and former EXO member doesn’t […]