Another South Korean star has committed suicide. On Wednesday, actor and singer Park Yong-ha, 33, hanged himself with an electric cord hours after coming home intoxicated, police believe. No suicide note was found, but police said Park had been under the stress of having to manage his entertainment company while caring for his father who was in the final stages of stomach cancer.

It’s been reported that before his mother found him dead in his room, Park tearfully told his father, “I must be sick instead of you, father. I’m sorry. I’m sorry.”

In Korea, Park was well-known for his roles in many hit dramas, including Winter Sonata, Men’s Story and On Air. He was also a top performer in Japan where he 10 hit albums in the past five years and won four consecutive Japan Gold Disc Awards — a first for a Korean pop singer. He was also set to play the lead role in Love Song, an upcoming Korean drama.

Park’s death comes after a string of suicides by South Korean celebrities in recent years.

Our thoughts and prayers go out to his family. 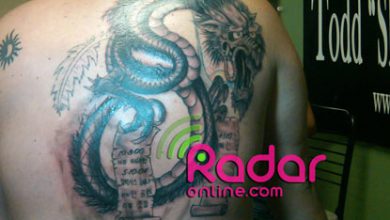 Notorious TV dad Jon Gosselin gets inked, according to an exclusive by RadarOnline.com. The problem? The humongous Korean dragon tattoo, taking up most of his back, looks more like […]