Nathan Bajar raises his voice over the sound of wailing police sirens in his Brooklyn neighborhood. He apologizes for the late call, but explains that he was held up during a photo shoot for the “New York Times.” As the sirens fade into the distance, his tongue lapses into those unmistakable, exaggerated vowel sounds of the Garden State, as he explains that he’s “New Jersey, born and raised.”

Bajar is a well-established photographer who has worked for publications like “Vice,” “Refinery29” and “Fader” for the last three years. His photography is characterized by soft color schemes, an ability to portray his subjects in a warm, human light and an indescribable quality—something that makes his photos feel as if they belong in the Polaroid-era. But now the young artist will be venturing out of the realm of pure visuals and stepping into a world of sound. On July 8, Bajar will be releasing a joint music and picture project titled “Playroom,” an endeavor that’s been nearly five years in the making. Bajar describes it as a love letter to his family.

“My house has always been the house that, if people were coming from the Philippines, they would stay with us for a little bit until they figured out their thing,” Bajar says. “A lot of my work is about being at home and exploring the relationships that I have with my family, and the relationships between people that I have at my house. My best friends growing up were my cousins. We’re all really close and tight-knit. I still kick it with my cousins all the time.”

And that home was always filled with music. Growing up, the sounds of soul artists like the Stylistics and Marvin Gaye, as well as classic rock bands like Crosby, Stills, Nash and Young and Pink Floyd would trail through the halls of the house. The family would frequently spin what Bajar calls “OPM”—Original Pilipino Music—which included acts like VST & Co, aka “the Filipino Bee Gees.” And with a mom who played piano and a father who loved to play the guitar, it’s no wonder that Bajar caught the music bug. “I’ve played music since I was 13,” Bajar says. “Filipinos really, really like American music. They like rock music. At parties they just drank, played guitar and sang songs together. It sparked my curiosity, and I really wanted to try it, too, because it seemed like a lot of fun.”

Although he’s always loved music, Bajar never saw himself pursuing it professionally. In fact, he started college with plans to become a nurse. That didn’t last too long, though. After taking a couple of art and photography classes during his first semester, he switched to design in his sophomore year. “There’s like four or five ‘Oh, man’ moments throughout my life,” Bajar says. “One was my first day at Montclair [State University] during a photo class, and the professor was asking us what we want to do after college. There was this person who said he wanted to be a touring guitarist, but he was in a photo class. And I was like, ‘Wait, you can study this, make pictures, and you can be a musician at the same time?’ That’s pretty f-cking awesome.”

The push to pursue music came in June 2018 when Bajar’s father passed away. Before his death, Bajar’s mother put on a special show to celebrate his birthday last year. She hired a band to play his favorite music, so he could sing along karaoke-style. She even put up flyers around the house to “advertise” the show. “I thought that was so beautiful,” Bajar says wistfully. “My dad really loved to sing. He used to sing karaoke at night for hours. That made me think about how my dad used to show me off to my uncles and be like, ‘Oh, Nathan can play the guitar.’ Or how he’d chat with me to learn songs. My dad really loved to sing and perform, so after he passed I was like, ‘D-mn.’ I wanted to make that dream happen for him, but also myself. But maybe I’m just on some corny sh-t.”

The photos that pair with the project are imbued with a warmth and tenderness that could be mistaken for nostalgia, but Bajar says he aims for a feeling that goes beyond that. He’s looking to capture intimacy, the kind that you can only find between family. “Even when I make pictures of someone for work, I try really hard to make them feel as comfortable as possible so I can get the most intimate portrait as possible,” Bajar says. “In family, there’s always a developing relationship, always something happening. There’s this piece by John Szarkowski saying that putting something in the frame of your camera gives it an elevated importance, and that really stuck with me. I make pictures of my family because I love them a lot. When I photographed them, it made them important because I’d done that.”

“Playroom” features soulful bass lines, dreamy vocals and a strong R&B influence. With the exception of a few saxophone and violin parts, Bajar recorded, produced and mixed everything himself. But, he makes it clear that this newest artwork is also the result of his friends and mentors who’ve supported him along his personal and artistic journey. “It’s been so overwhelming, and I get really emo when I think about it,” Bajar says. “Like we were all working on the ‘Devil Girl’ [featuring Cecefayce] music video, and I had all of these people helping me out, but I didn’t have the bread to pay them at the time. But they were like, ‘Nah, dude. We’ll do some awesome, homey stuff.’ Everyone was working so hard for so long, and it was raining. It was super intimate, and I actually started crying because I just felt like everyone was really here for me and just wanted to see me succeed.”

Bajar is anxiously waiting for his album to drop. “Playroom” comes from a tender place near and dear to his heart, so thinking of how audiences will react makes him anxious. But he’s ready to start a conversation about his art, even if it is just a small one. “I have terrible imposter syndrome,” Bajar says. “I’m always overthinking and questioning myself, like I’m not good enough for certain things. I’m so scared because it’s so personal, and I feel like I’m going into the world naked. It’s really scary. But, recently, I started being more confident. Before it was like, ‘Oh yeah, I take pictures and I kind of make music.’ But now it’s like, ‘I’m a photographer and I’m a singer.’ I’m working on it.”

As Bajar wraps up his last few remarks, a few car horns blare at each other with a fervor and gusto acceptable only within the geographic boundaries of the city. He pauses for a few moments to think, unbothered by the noise. “But I guess, one of my biggest things is to work on things that I care about fully,” Bajar says. “Because, if you don’t care about it, why should anyone else care about it? And I really care about my family.” 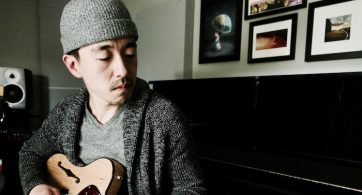 As a composer, Brian H. Kim is an expert in perfect timing—he has to be. But in life, things don’t always line up as neatly as they do on […]