As a composer, Brian H. Kim is an expert in perfect timing—he has to be. But in life, things don’t always line up as neatly as they do on a staff sheet.

“We’re on pins and needles,” Kim says. He’s calling from his home in Los Angeles, where he and his wife are awaiting the birth of their second child. “The due date was last Monday, so it’s any day now.” Despite the gravity of his situation, it’s hard to detect even a hint of anxiety in his voice. The easygoing musician sounds like he’s just talking about the weather.

Were it not for Kim choosing to follow his passions, his life might be a very different place right now. Originally from Syracuse, New York, Kim moved west in 2007 to pursue a career in music, after struggling, like many Asian American creatives, to fulfill his parents’ traditional expectations. Although he has played piano, guitar and saxophone since childhood, his parents wanted him to pursue the ultimate Asian career path: medicine. “I went to undergrad for pre-med, then I became a teacher; but throughout that time I was always doing music,” says Kim. He enjoyed teaching, but the allure of becoming a professional musician was too tantalizing to ignore. After being admitted to the University of Southern California’s film scoring program, Kim packed up and traded in his East Coast job for life in L.A., “just to see if I could do it.”

While still in grad school he landed a few gigs as a composing assistant for various TV shows, and then, as Kim says, “It sort of snowballed.” Ever watched “How I Met Your Mother?” Kim served as assistant composer for its catchy original songs (including Barney Stinson’s unforgettable jingle “Nothin’ Suits Me Like a Suit,” for which Kim also provided vocals). His playful synth beats appear on TBS’s “Search Party,” and Kim also worked on the award-winning soundtrack for the Netflix film “G.B.F.” (2013).

Lately he’s been composing for Disney Channel’s “Star vs. The Forces of Evil” and the new NBC sitcom “Abby’s.” The two shows are as different as night and day: “Star” follows the animated adventures of a magical princess from another land, and “Abby’s” is about an unlicensed bar operating in a San Diego backyard. “On ‘Star,’ the emotions run high, the action is fast-paced, and the visual style of the show is cranked up,” says Kim. “The music has to match that amplitude. A lot of my favorite tracks for that show are really wild, complicated electronic-string hybrids. But for adult comedies like ‘Abby’s,’ a lot of it is finding the space and timing to make the jokes themselves really sing.”

Kim has spent plenty of time developing those musical nuances. When he first began composing at USC, his songs mostly stuck to the dance-pop genre. He struggled to find his own musical voice, and worried that that his piano skills might box him into an Asian stereotype. “I tried to play less piano music because I felt people would think, ‘He’s just another Asian kid playing classical piano,’ not somebody they could take seriously as a composer,” Kim says. “The biggest hurdle for me was the fact that I didn’t really know anybody who looked like me who was doing this job.”

Inspiration came in the form of a martial arts film. After listening to Tan Dun’s work for “Crouching Tiger, Hidden Dragon” (2000), Kim began to embrace instrumental scores and his Asian heritage. Now, much of his compositions for film and TV tunes into that electric, lo-fi sound he first started writing with, but his work also features grand orchestral music. He feels most comfortable working on the piano, so his themes often center around that instrument. He also composes on the guitar and, when he can sneak it in, saxophone. “It never makes it. It sticks out like a sore thumb,” Kim says, chuckling. “You can try to make it cool, but whenever it has a moment, I’m going to try again.”

Besides waiting for the sax to have its day, Kim also hopes to see an increase in ethnic representation in Hollywood, both in front of the camera and behind the scenes where he works. “Asian filmmakers are really having a moment in the spotlight, and I hope everything from 2018 just continues on,” Kim says.

With enthusiasm in his voice, he outlines his dream of the future for his oldest son, who is 2-and-a-half at the time of the interview. “I hope that when my kid is older, and he maybe wants to get into film, music or television, it’s not even going to be a question about whether he can,” Kim says. “The thoughts that crossed my mind when I was younger will not cross his mind—if that’s a path he decides to take.” As with Kim’s music, it’s all a matter of time. 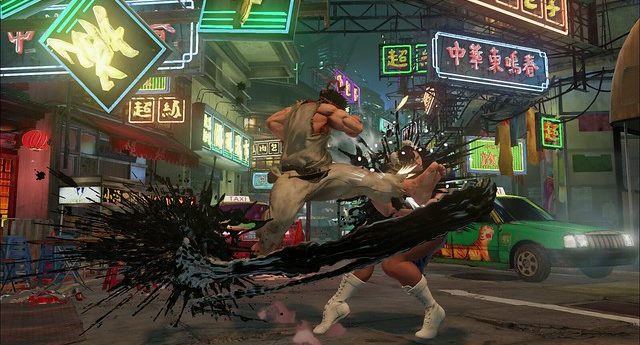 Video games give us the unique opportunity to literally control and live vicariously through some bad @ss characters. Asian Americans make up the highest percentage of gamers, and we’ve […]