A prominent Asian American Seattle community and civil rights activist died Monday at the age of 67 after a public two-year battle with cancer.

Alan Sugiyama, an outspoken advocate for affirmative action and increasing funding for communities of color, served as the executive director for Executive Development Institute, a nonprofit organization that focused on leadership training for minorities, until he was diagnosed with cancer in February 2015.

Sugiyama, a third-generation Japanese American, was raised in Seattle and helped organize the Oriental Student Union at Seattle Central Community College in 1971. He went on to found a local newspaper for the Asian Pacific American community, the Center for Career Alternatives, and become the first Asian American in history elected to Seattle’s School Board in 1989, according to his biography on the University of Washington’s website.

“He was a leader in helping some of the biggest institutions in Seattle — the community college, the University of Washington — recognize the need to pay fundamental respect and attention to the needs of Asian Americans,” Bob Watt, who was friends with Sugiyama for almost four decades, told KUOW.org, a Seattle-based news radio platform.

“Sometimes, he did that by demonstrating, sometimes he did that by negotiating, but [he] always did with a positive spirit and a determination that was fierce,” Watt said.

Sugiyama served two four-year terms on the school board, advocating for faculty diversity and bilingual education.

“I am deeply saddened by the passing of Seattle community advocate and civil rights legend Alan Sugiyama,” Seattle Mayor Ed Murray said in a statement. “Alan will be remembered as a natural organizer and gifted storyteller, which allowed him to unite people on the pathway to change.”

Though he initially underwent aggressive chemotherapy which shrank the tumors in his esophagus and pancreas, his fierce battle took a sharp turn for the worse last November when he collapsed in Hawaii due to the cancer spreading to his brain, according to the International Examiner.

Sugiyama’s youngest daughter, Alysa, told the International Examiner that she learned from her father the values of always “fighting for what is right and helping those in need.” 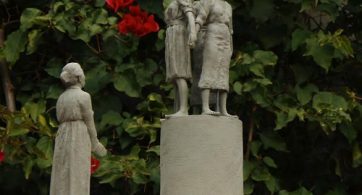 Come the end of this year, San Francisco is expected to have a new — and undoubtedly controversial — memorial: a tribute to the so-called “comfort women,” young sexual slaves […]