As the museum’s website will tell you, the Smithsonian Asian Pacific American Center is not “a traditional museum with a public building,” an eloquent way of saying that real estate is very expensive in Washington D.C. For the traveling Asian American collection, a permanent home in the nation’s capital would start at estimates around $25 million. This past Saturday, a fundraiser in Los Angeles began collecting money to achieve that ambitious goal. For reference, if every single Asian American donated one  dollar, we’d still be $5 million short. We’re hoping some crazy rich Asians will pick up the slack.

Here are eight objects of Asian American entertainment history we’d like to see on display:

Anyone who has seen “Game of Death” knows what we’re talking about. The trademark outfit is inextricable from the identity of the Kung Fu legend. The jumpsuit inspired the wardrobes of “Kill Bill” and “Shaolin Soccer,” and Halloween costumes of every  wannabe Bruce Lee. Still, we doubt the jumpsuit’s owner would willingly part with the legendary memorabilia. It fetched roughly $100,000 in a 2013 Hong Kong auction.

Honestly, a fly-swatter would have been more efficient. Still, we wouldn’t have had this iconic cinematic moment, where Daniel (Ralph Macchio) catches a fly with Mr. Miyagi’s (Pat Morita) chopsticks in “Karate Kid.” We have no idea if this iconic prop is still around, but with some (beginner) luck, who knows…

The legendary Chinese American artist is famous for the starry-eyed deer and adorable rabbits that fill “Bambi.” Wong once credited Song Dynasty paintings as the stylistic inspiration for his playful creatures. How cool would it be to see the brushes behind some of our favorite animated forest critters?

4.The Mahjong Table From “The Joy Luck Club”

Before “Crazy Rich Asians,” we had “The Joy Luck Club.” The second movie ever to have a majority Asian American cast, the adaptation of Amy Tan’s best-selling novel prominently featured a mahjong table where four Chinese immigrant women convene and chat away the night. We’d love to have a seat where Lindo, Ying-Ying, An-Mei and Suyuan shared their life stories.

Sure, we’ve all seen the iconic film, but how many of us have seen the process behind it? The concept art behind the popular animated film would provide a fascinating look behind the scenes of one of the world’s most famous Asian American movies.

It would be amazing if the new building could accommodate the world’s largest cinematic wave pool. But we don’t know how they could fit a 250-foot-long tank through the doors, so we’ll settle for the raft that traversed across it. Although, we’d highly prefer if it wasn’t in the company of a hangry Bengali tiger.

7. Han’s Mazda RX-7 From “The Fast and The Furious” Series

You won’t find this whip at any old car meet. Before his fiery death, Han (Sung Kang) primarily drove this discontinued Mazda through the streets of Tokyo. With how much influence the series has had on Asian American car culture, this souped-up import is something we’d love to see in the halls of the museum.

8. The Miniatures of Frank Wong

Our last selection is not a movie prop, but the work of artist Frank Wong was inspired by a seminal piece of Asian American cinematic history— “Flower Drum Song.” He created props for films and TV shows like “Magnum P.I.,” but we’d much rather see one of Wong’s beloved dioramas than Thomas Magnum’s Hawaiian shirt. The artist’s recreations of scenes from his childhood in Chinatown are on permanent display in San Francisco, but it’d be incredible if one (or more, we wouldn’t complain) made an appearance at the proposed Asian Pacific American Center. 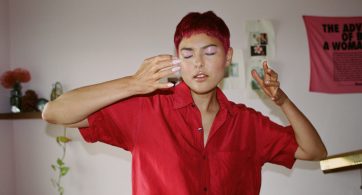 Miya Folick is back not with a bang, but with a whisper. Her latest single, “Malibu Barbie,” features Folick’s signature vocals at a much lower decibel than much of […]