Filmmaker Justin Chon is known for crafting movies that examine the complexities of the Asian American experience, including the critically acclaimed “Gook” and the 2019 Sundance release “Ms. Purple.” His latest film, “Blue Bayou,” follows South Korean adoptee Antonio LeBlanc (Chon) as he faces the possibility of being deported from Louisiana following an altercation with a police officer.

As explained in the film, the Child Citizenship Act of 2000 granted U.S. citizenship to most transnational adoptees but did not retroactively apply to unnaturalized adoptees over 18 at the time the law went into effect. The loophole is used to this day to deport international adoptees. Organizations like Adoptee Advocacy, a few members of which consulted on “Blue Bayou”’s production, help those impacted by amplifying their stories, providing funds for legal assistance and more. They currently advocate for the Adoptee Citizenship Act of 2021, which aims to protect adoptees who are still seeking citizenship and those who have already been deported.

A long-time friend of Character Media, Chon greets us warmly as we sit for an interview weeks before the film’s release in theaters. This conversation has been edited for length and clarity.

Character: Knowing your work as an actor and your work on “Gook” and “Ms. Purple,” why was it important for you to direct, write and act in “Blue Bayou?“

JC: There’s a common thread, you know? They’re Asian American-centric [stories] and they tend to have unconventional families. They are about our experience in this country in different ways. Stepping behind the camera, I have control over the stories that get put out into the world and I want to bring empathy to our experience. I hope that [our stories] get normalized in this country and we aren’t seen as ‘the other.’ It’s important that we’re seen in an authentic way.

Because the adoptee experience is very much a part of the Asian American experience, I wanted to represent that community in an honest and truthful way and make sure that they were also a part of the conversation.

Going into the details of the film, can I ask why you wanted to set the film in New Orleans and why you chose to give Antonio that distinct accent from the area?

I wanted to set it in the South because our experience is not just limited to the coasts. There are quite a few Asian American communities in the South. The conversation about what the physical appearance of an American is: Well, if someone has a Southern accent that’s very American, but you put an Asian face to that and it’s like, ‘Wait, hold on. Does that compute?’

New Orleans is a particular place like no other in the United States, and it’s a very resilient place. It feels like a different country; it feels like it’s basically underwater half of the time. A lot of Vietnamese refugees were relocated there after the Vietnam War—to Texas, Louisiana and Mississippi—was something else I wanted to showcase. So, I felt like New Orleans in particular was the perfect place for the film.

It definitely helps set the mood and tie the story together. In the opening scene of the film, we see your character get asked, ‘Where are you really from?’—you know, that perpetual foreigner question. Have you had that experience yourself, and if so, how did that influence Antonio’s character?

The first scene in the film, you’re trying to put everything together. You’re looking at an Asian man, and it’s peculiar to see a Caucasian girl standing next to him. Then, you see he has an accent and you hear that the person across from him also has an accent, and you see the way Antonio is treated. In that one scene, you understand his past. You understand very quickly what he’s dealt with, his resilience and maybe who this girl is to him, and it makes you catch up very quickly.

A lot of us at one point have been asked, ‘Where are you from? No, where are you from?’ And being Korean American is interesting, because being born in the United States and being constantly asked that question, then going back to Korea and [Koreans] not considering me Korean either, it made me wonder, ‘Where do I belong? Where is the place I should be?’

I’ll never understand what it feels like to be adopted, but this movie was my way into maybe understanding a kernel of what they might go through.

Can you talk a little bit about the process of writing the film and what made you decide to tackle this specific issue?

I started hearing through the adopted community that some adoptees were being deported, which was really just unfathomable to me. The fact that a child was brought from a different country by U.S. citizens and then 30 years later the government would decide, because of a loophole in paperwork, that they’re not citizens anymore? It doesn’t make sense to me.

I thought at first that it was a simple [matter of], ‘I’m sure they can get a lawyer. There’s a way,’ because it’s obvious that they belong. They should stay. And then I realized that wasn’t the case. There’s a finality to it. Once you get deported, it’s almost impossible to come back.

So, it just broke my heart, and through research I found out about particular cases. I heard the story of Phillip Clay and how he ended up committing suicide once he was deported to Korea. I found out that was common, because a lot of these people have no connection to the country they’re being deported to. They have nothing, no resources and no support and it’s like a death sentence.

That was incredibly shocking, and nobody was talking about this. Nobody knows about this unless you’re directly affected or you have an interest. Hopefully by making a movie, then something can change. 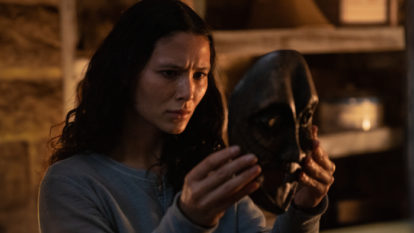 Stewart plays the daughter of Amanda, a Korean American woman whose issues with her mother go beyond the grave.