Everyone loves a good Netflix binge, but let’s face it, there are some content niches that not even streaming platforms can touch. Through networks like Instagram, YouTube and TikTok, many social media influencers have been able to provide fresh content that hasn’t been explored by mainstream media. We DM’d some of the biggest creators to answer some of our most pressing questions about being an API influencer—without restricting their character count.

What influences you and the work you make?

Leenda Dong: “Realizing the work I do can uplift people’s spirits when they are having a bad day. That is my biggest motivation when creating content.”

Melody Cheng (AsianBossGirl): “I’m very inspired by the impact I felt in college when I interned at the San Diego Asian Film Festival, working with Lee Ann Kim and Brian Hu. Through that internship I saw a community, Asian and Asian American representation through film, and connection through shared experiences for the first time. I told myself if I can contribute to this movement in any shape or form and allow others to feel what I felt through my internship, I would be very happy.”

ZHC: “I, like many other Asian kids, have strict Asian parents. So, they taught me a lot about discipline and working hard. I take that into my art and into my videos so they can be the best they can be. I also take inspiration from Asian productions and cinematography.”

Lizzy Capri: “Definitely! I try to empower my viewers through the content I create and I really do love going above and beyond in producing quality videos and taking on large projects to show that it doesn’t matter where you’re from, but rather who you want to be. Growing up in a very traditional household and being the first generation in my family to grow up in the U.S., I had a hard time expressing myself and felt like my creativity was suppressed. Now that I have this amazing opportunity to be creative without any limits, I go a little crazy and ridiculous with my ideas, hence my channel today!”

Rock M. Sakura: “My heritage definitely influences the content I produce. Although I always want to produce content that is accessible, I try to make videos, pictures, TikToks and costumes that would inspire an Asian American kid growing up in a fish-out-of-water situation like I did. I always think, ‘Will some kid view this and feel a bit more seen, a bit more inspired?’”

What are your top three tips—mental and appearance-wise—to look your best on camera?

Rock M. Sakura: “Drink water, wash your brushes and have faith that you’re funny. I cannot tell you how much my face texture has improved now that I wash my brushes and hydrate. I used to feel very punk and quirky because I never washed my brushes, but I have to tell you, nothing is more punk than smooth texture. Also, being in front of the camera can be super daunting. My best advice to anyone out there who is a bit camera shy is to breathe and remind yourself that you’re funny. Don’t think, just do.”

How would you explain the concept of being an influencer to Asian parents?

JeenieWeenie: “To be honest, I still don’t really know what it means or how this happened. But I did tell my umma, ‘I use my life stories and try to make people laugh. It brings me joy and a sense of purpose that I brighten just one person’s day even for a split second. I do this by posting whatever I want on social media.’ Of course, the first thing she said was that this was not a career. But I proved her wrong.”

ZHC: “I’m creating content and doing what I love. I’m very lucky to have supportive Asian parents. I did have to do some convincing when I dropped out of college. I wanted to drop out of high school, but they wouldn’t let me. But ultimately, they’re happy I like what I’m doing. Family comes first for them.”

Melody Cheng: “I’d share with my parents the importance and context of Asian American representation and how we’re trying to connect with others through our stories as modern-day Asian American women. Through our experiences, we found a lot of similar women who resonate with our stories.”

Who is an API influencer you admire?

SeanDoesMagic: “One of my biggest inspirations growing up, and actually one of the people who inspired me to start creating, was Ryan Higa (aka NigaHiga). His creativity and ability to tell a story through a platform as new as YouTube was very admirable.”

Janet Wang (AsianBossGirl): “Joanne Lee Molinaro (@TheKoreanVegan). She creates content featuring vegan versions of Korean dishes set to personal monologues. They are beautifully shot and accompanied by the narration of what sound like journal entries, with personal reflections about childhood memories, her culture, being a woman, her career as a lawyer, passion for veganism … She pairs soothing and beautiful visuals with audio narration of serious and confrontational topics. I find her work mesmerizing and meaningful.”

Helen Wu (AsianBossGirl): “Naomi Osaka. She is an inspiration, not only for her athletic prowess, but for what she represents off the courts in the world of mental health. Despite heightened pressures of the limelight, she chooses to strip away unsolicited expectations to be unapologetically herself and to be unapologetically human. She inspires many as she finds her own voice in a very public setting with great humility and fearlessness, and she is someone whom I feel thankful to have as setting an example for my child.”

How do you feel about being viewed as an “influencer?”

SeanDoesMagic: “The term ‘influencer’ has gained a very negative reputation the last few years, but in all honesty, it’s such a blessing. I would have never thought that a few hundred, let alone 20 million, people would be interested in hearing what I had to say, but I am so unbelievably blessed and thankful to be in the position I am.”

Steveioe: “I feel very lucky, but sometimes I take it for granted. This time last year I had absolutely no influence and now millions of people are listening to me and using me as a means to justify their decisions, the things they do in their lives and their feelings toward people. I know I have the power to do some good beyond social media but I’m still figuring out the best way to do that.”

Rock M. Sakura: “I never really viewed myself as an influencer, but if people are watching you, in whatever capacity, you can influence other people. The minute you consider yourself an actual influencer, it will start to feel a bit fabricated. I really appreciate authenticity and honesty.”

Which three API influencers would you want to have at your side during a zombie apocalypse?

JeenieWeenie: “Melissa Ong. I feel safe with her around. Maybe because Melissa would probably sacrifice herself first and turn into a zombie just so she [could] turn it into a meme afterward. Joanne Lee Molinaro. If I’m going to most likely die soon, I might as well get a good meal and a story that will help me reflect on my past life choices. Leenda Dong, my vibe sister. I know we would just crack jokes and try to make the best out of everything during the end of days.”

Lizzy Capri: “Bretman Rock because we would have fun through it and I feel like he would be good at surviving. Maangchi to whip up delicious food for us, [and] Sara Choi to escape from the zombies.”

Steveioe: “Pregnant Ali Wong for her motherly instincts. Ken Jeong to heal me in case I get attacked. JeenieWeenie to shoot me in case I turn into a zombie.”

Helen Wu: “Ali Wong—if her [physical] strength is as strong as her jokes, she’d have enough power to fend off a whole army of zombies. But if not, she’s someone I can totally see myself laughing it up with until the very last moment. Philip Wang—as my husband, he’d sacrifice himself first! Kidding. But if I were to die, I’d want him by my side. And Gemma Chan. Basically, Ali Wong, Philip and myself would be useless in an actual fight against zombies. Gemma, being the Marvel superhero that she is, would save us all.” 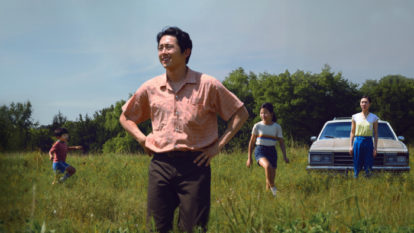 Find out why and how the two organizations teamed up to secure awards recognition for AAPI-driven projects.