Here in Southern California, we’re decking the halls with boughs of palm and spreading some fake snow for “A Hollywood Christmas!”

Directed by Alex Ranarivelo, the film arrived on HBO Max yesterday, Dec. 1, and stars “Seoul Searching” actress Jessika Van as holiday film director Jessica. Her orderly set gets upended by the arrival of a network executive, Christopher (Josh Swickard), who brings some new and unwelcome ideas for how Jessica could run the place. But after initially clashing, the two soon realize that there’s both love and holiday magic in the air. With a little help from Jessica’s personal assistant, Reena (Anissa Borrego), can Jessica and Christopher unite to pull off the ultimate feat—saving Christmas (movies)? And will their new relationship melt away before the credits roll?

Van recently connected with Character Media to dish on her favorite on-set moments, why “A Hollywood Christmas” should be your streaming pick this holiday season, and more!

As this is also your first time working on a holiday film, did you learn anything surprising or unexpected about making a Christmas movie?

I didn’t actually approach it as a Christmas movie, per se. I focused on the character of Jessica, who I loved, and her journey in directing her movie. I was, however, pleasantly surprised to find that sometimes the formula and the tropes work. I’m often looking for something unique, and I forget that there is beauty in the familiar.

How do you think the film embodies the Christmas spirit, while also stepping outside the traditional holiday movie framework?

I think that by having a meta movie-within-a-movie self-awareness, the film is able to both be playful with comedic holiday tropes and have grounded moments where we can experience with Jessica the real joys and frustrations that come with filmmaking and telling the stories we love.

What were some of your favorite on-set moments while filming “A Hollywood Christmas?”

I’d probably find it easier to pick non-favorite moments, because I had such a wonderful time. There was something so special and grounding about the consistency and stability of working with my character everyday—putting on her organizational director brain, being part of a system that ran like clockwork and collaborating with a team, cast and crew that felt like a family.

There were hilarious moments where we couldn’t tell the difference between the “real-life” crew and the “fake” crew because the actors were so fantastic and the crew so supportive. I’d sit down in the “director’s chair” and double-take whether it was the real-life script supervisor sitting next to me or the movie actor version. I’d struggle to keep a straight face because everyone around me was so funny. At the end, I secretly got the cast together to create an internal spoof video where we played our real-life counterparts and crew and did our best impressions of them on set. Then we surprised them with a little screening of it on lunch break.

I loved the morning drives onto the Warner Bros. lot, sun still ascending, taking a few quiet moments in my trailer to go over my binder scribbles on what we were shooting that day…

On our last day of filming, there was a scene where Jessica gets bad news and books it out of the stage into an open-air alleyway. She has a fleeting moment alone to breathe and decompress before her assistant comes out to join her. I loved filming these quiet moments. The world moves so fast; it feels like we’re always on the go and there’s something so human about taking a moment to feel, to process. It felt liberating to walk out into the setting sun and ground Jessica in that little beat of quiet.

How did you bring your own filmmaking know-how to the role of Jessica?

What resonated for me is how important your project is to you; it’s your baby. The tiniest details mean something to you, and even small compromises can hurt. But I’ve learned to discipline myself to focus on the bigger picture and really let go and trust that we’ve brought the right minds together. And to have fun. Life is happening in the process, so I remind myself to be happy as I go.

“A Hollywood Christmas” seems like it has something to brighten everyone’s holiday season. Can you share a little more about what the movie has in store for audiences?

Laughs, an adorable dog, a peek into Hollywood hijinks and so much heart. They’ll pick up some industry lingo. I hope the audience has as much fun watching it as we had making it.

What is your favorite Christmas movie trope?

That everything always works out in the end. Wouldn’t that be nice? 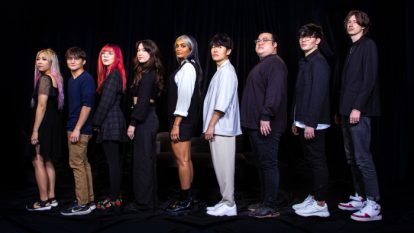 The members of content creator house OfflineTV get personal about the misconceptions of livestreaming, how to survive a round-the-clock creative job and what’s next.