A god-killing bullet, super-powered heroes from across the globe, gruesome murders and… cyborg T-rexes in Syria?

“The show is impossible to describe, unless you’re watching it,” says Adi Shankar, the mastermind behind the new Netflix show “The Guardians of Justice.”

Audiences can see for themselves when they catch up on the series, which premiered on March 1. An unabashedly joyous mixture of live-action, retro game footage, claymation and much, much more, the show first debuted last fall in competition at Canneseries. Will Yun Lee stars as Marvelous Man, joined by pro wrestling star Dallas Page as Knight Hawk.

The nuts-and-bolts details of the series might be easy to convey, but the plot is another matter entirely. “What’s tricky is that the show exists in so many different mediums,” Shankar says. “You think it’s live-action, but it’s not actually live-action. You think it’s serious, then it just becomes more and more of a comedy every five minutes.”

Shankar, a director, producer and sometimes actor (keep an eye out for his role in “The Guardians of Justice”) leads the Bootleg Universe production company, which has produced shorts like “The Punisher: Dirty Laundry” and “Pokémon: The End of Pokémon”—sans permission from the owners of those IPs. He’s also racked up above-board credits on video game-based fare like “Castlevania,” and will soon take the reins on an adaptation of “Devil May Cry.” Fans can next see him at the helm of the “Captain Laserhawk” series, which will also debut through Netflix.

We caught up with Shankar shortly after “The Guardians of Justice” premiered to find out how he developed the series, who inspires his work and his feelings about it finally being released to the public after six-and-a-half years in production (spoiler alert—it’s complicated).

Character: There are obviously a lot of inspirations and influences that went into this series, but what were your top three?

AS: John Carpenter, the filmmaker. Professional wrestling. And Saturday morning cartoons. Carpenter, he’s my favorite filmmaker. His movies, his worlds, were weird in the most brilliant way. Professional wrestling is this over-the-top, theatrical, macho grandiosity, which I wanted to explore through the show. And with [‘The Guardians of Justice’], I was trying to make a Saturday morning cartoon with some live-action. It wasn’t like, ‘Hey, we’re making a live-action show with animated elements.’

How did you develop the character of Marvelous Man?

I was super depressed in 2014. I was hitting a peak in the first act of my career and I was getting more and more unhappy everyday. I didn’t know what was happening. So, I finally went to a doctor, and they put me on Zoloft. When the chemicals started kicking in, it felt like ‘The Wizard of Oz;’ everything became bright and colorful again. I started feeling happy and hopeful, and I immediately started exploring how I felt before the medicine. I realized, I’m a prisoner in my own body. Then I was like, ‘Well, what if that person was Superman?’, dealing with the weight of the world, of a life of servitude. Granted, I wasn’t out there saving the world in my 20s, but I was definitely feeling the weight of a lot of burdens and unresolved trauma, and that became Marvelous Man. I came up with his opening monologue as the Zoloft was kicking in.

I was reading a recent interview of yours, where you described this show as your most personal project yet. What were some of the other personal elements that you brought to the series?

One way to interpret the series is that there’s all these different characters; they’re all kind of one consciousness, having a series of conversations with itself. And that one consciousness is me.

On the surface, it’s easy to look at it like a superhero show, but below the hood, it’s not a superhero show at all. It’s a spoof, a political satire, this giant metaphor for how I see the world. Someone asked me, ‘Why is it like this? Why are there different mediums?’ And I said, ‘This is what it’s like to exist in my head. This is an accurate representation of how I see and process the world.’

There’s a meta joke with ‘Guardians of Justice,’ that I got to do this and that it now exists. There’s something ridiculous with that, like, ‘This exists? How is this allowed to exist in the world?’

What were some of the most difficult moments you experienced in creating the series?

If it’s impossible to describe the final product, think about how impossible it was to describe what I was trying to do. Imagine having to explain to your coworker, ‘Hey, I’m going to make a show, and it’s gonna be like this, and this, and this and this,’ and they’re like, ‘Are you on drugs right now? What are you smoking?’

[I got] a lot of blank stares. I had to become really, really good at explaining what was going on in my mind. Otherwise, this would not leave the station. It ultimately required a lot of belief in myself, and on the part of Netflix. I’m forever very grateful and indebted to Netflix. Because of the nature of this, it wasn’t clear to anybody that it would work until right at the end, when you take all the mediums and you start stitching them together. It took me six-and-a-half years to sculpt, and it felt like I was making a sculpture, not a show.

So, how are you feeling now that it’s finally out there in the world?

It’s complicated. We read the feedback for the show, and it’s interesting. People are loving it, which is awesome. I spent so much of my life working on this one thing, and I’m grateful it’s finally out and I’m thrilled people are responding to it.

It also feels like there’s a child who has left and gone off to college, but has also simultaneously been drafted to war. So, he has to go fight a battle, you don’t know if the child is going to survive, then in the middle of the night, I get a phone call that the child got shot and they have to inject the child with a super serum that may turn the child into Captain America or a super villain. That’s the way it feels. 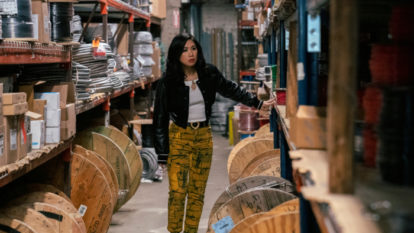