What is it with racism and colleges nowadays? This past Friday, an e-mail from a member of University of Maryland’s Kappa Sigma Fraternity leaked and it is horrifying. Warning: abhorrent language below.

We may have heard the “slanted eye chinks” comment before, but “curry monsters?” Really? And of course, we have to point out what he said about consent. This man is not only just a racist man with abhorrent thoughts, he may genuinely be a threat to all women. Not cool, bro.

The Presidents of the University of Maryland and Kappa Sigma have both released statements condemning the racist email. But amazingly enough, this man still has his defenders:

UMD varsity football player and Quince Orchard alumni, Alex Twine, an African-American. Twine, a Gaithersburg native, is a senior education and American Studies major at UMD. “I’ve known AJ Hurwitz for years,” Twine told The Bottom Line, “He’s never been a bad person or racist. He’s an idiot for that email, and I don’t know why he would ever say something like that. The email was very wrong and there should be consequences, but let’s not ruin his life. He is not the only person that has ever sent something like that; he’s just one of them that have been exposed.”

Another was Corday Thomas, also an African-American friend of AJ. Thomas, like Twine, graduated in the same 2011 class as Hurwitz. He said, “I think it [the email] was taken out of context, but it is just unacceptable to say things like that. I’m not so much offended as I am disappointed and embarrassed for him. Racism is never okay, and you should never refer to women like that.”

Thomas also acknowledged Hurwitz for an act of generosity in the past, “Freshmen year of college, when my family moved to New York, I had no place to stay for spring break. He let me stay with him, fed me, hooked me up; I’ve chilled with him countless times, and I know he’s not a racist. However, he has to learn from his mistakes.”

So he has not one, but two black friends. How progressive of him!

In all seriousness, what is in the air? From the time Duke University Kappa Sigma had it’s “Asia-themed” party to the old anti-Asian rant from Alexandara Wallace, it appears as if there’s an increase in anti-Asian sentiment at colleges. Is that actually true or are we just hearing more about racist incidents now? More importantly, how do colleges move past this? Let us know in the comment section below. 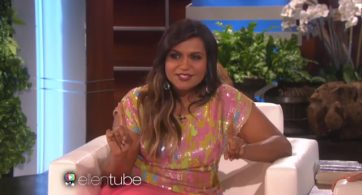 Mindy Kaling is a successful OB/GYN but her personal and dating life is a mess. Oh wait, that’s Mindy Lahiri, the fictional doctor she plays on her show The […]