Raja Kumari, née Svetha Rao, has established a name for herself in the music world over the last few years. Her work as a songwriter on Iggy Azalea’s “Change Your Life” earned her a Grammy nomination in 2015. She co-wrote Fall Out Boy’s “Centuries,” which reached No. 10 on the Billboard Hot 100. She’s collaborated with Gwen Stefani and Fifth Harmony.

These aren’t easy feats to accomplish for anyone, let alone an Indian American woman. And Kumari doesn’t let her hyphenated identity deter her work; she prides herself in it, letting her culture set her apart as an artist. Her Indian classical dance and music skills cascade into her own hip-hop and rap work, when she’s not composing hits for others. Her new track “Shook” is the best example, with its foot-tapping rhythm and feisty lyrics with references to Hinduism and Gandhi. She wanted the song to be unapologetic. “It’s my way of letting the world know that brown excellence has arrived,” she said.

“Shook,” recorded when she returned to the United States after a one-and-a-half-year stay in Mumbai, is on her upcoming third album “Bloodline,” in which she explores her two sides — one that grew up loving hip-hop and one that grew up learning Indian classical dance and music. Born in Claremont, California, to Indian immigrants, Kumari was always influenced by her culture. “My parents made sure I started learning classical music when I was 7.” She got a bachelor’s degree in religious studies with a focus on South Asian religion from the University of California, Riverside.

Meanwhile, she developed a strong affinity toward artists like the Fugees and the Wu-Tang Clan. It’s no surprise that she decided to blend both her worlds when she decided to pursue music full time. “I wanted to create something I didn’t have growing up. I am today the artist I needed as a child,” she said. “‘Bloodline’ is me being bold in the face of critics and naysayers. This is the type of music that runs in my blood. The art runs through me, and I can be nothing else but an artist.”

As a female artist of Indian descent, she is conscious of the power she holds, but that doesn’t solely drive her art. Her songwriting process thrives on melody. “What I’ve learned in my travels is people might not speak the same languages, but everyone loves the music; it comes before English or Hindi or Telugu or Spanish,” she said. Once she finds the symmetry in her melody, she freestyles the lyrics. It’s a technique she finds most liberating.

During a three-day writing experience while working on the Fall Out Boy album “American Beauty/American Psycho,” she wrote three pop songs with Justin Tranter and J.R. Rotem. But it was at the end of the session, in a spur of the moment, when they decided to do one more chorus — and that’s how “Centuries” was born. “We wrote it in 15 minutes, and I sang it in one take. That was the only song that mattered from those three days.”

As for hopeful future collaborations, she’s set her sights on M.I.A. and Bollywood heartthrob Shah Rukh Khan. “I just want to contribute to the ongoing brown renaissance by elevating representation in the music industry and be part of the legacy that helps the diaspora grow.” 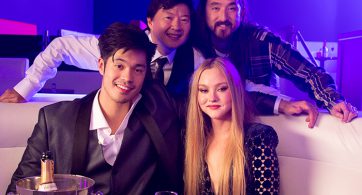 If Steve Aoki took away one message from the blockbuster success of “Crazy Rich Asians,” it was this: An Asian American moment is finally happening. So naturally, when it came […]