What do film and TV characters like Jack Sparrow, Jon Snow, Neo and Indiana Jones have in common? Well, they’re all portrayed by white men — and as of last month, they have all been “yellow-washed” by Dumbfoundead, the Los Angeles rapper who has seen his music video for “Safe” become a centerpiece in the nationwide conversation on Hollywood white-washing.

“I ain’t never heard of none y’all fools,” he states in the song. “I can do whatever everyone of y’all do.”

The video, which superimposes Dumbfoundead’s face onto iconic film and TV characters, has become one of the rapper’s most viral releases to date. It is also a taste of what’s still to come from the rapper — he is set to release a new album in July, his first in three years, and available as a free download.

Dumbfoundead’s rap battles have garnered millions of YouTube views and established him as one of L.A.’s best freestylers. But it’s time to grow up and move on from that scene, he said. His priority has shifted to creating music and into, as he puts it, “giving a f—k.”

“[The coming album] is youthful and energized, but there’s a bit of darkness to it,” said Dumbfoundead, also known as Jonathan Park. “It’s the darkness of a struggling artist. I don’t think a lot of people understand, especially in the Asian community, that [life] of the blue-collar rapper. People don’t really understand the independent grind. Rap is a youthful industry and a very youthful genre, and it comes with this attitude of, ‘I don’t give a f—k.’ That’s the period I went through, where I was an artist with that attitude. Now I’m older and starting to give a f— about things. I’m the breadwinner of the house. I’ve got to take care of my parents. My sister just had a kid. So I’m battling my own struggles with getting older. I’m in the post-‘I don’t give a f—k’ stage.”

The rapper’s last full-length release, the mixtape “Old Boy Jon,” was in 2013.

“I’m excited to drop a piece of work that everybody can download for free, to make up for lost time,” Dumbfoundead said.

Not that he’s been gone since the mixtape — Dumbfoundead collaborated with up-and-comers like Keith Ape and Okasian for an “It G Ma” remix and “Domes” last year, and he’s been featured in songs for Jeff Bernat, Mike B. and Azure, before dropping “Safe.”

The song, which came hot on the heels of social media campaigns like #StarringJohnCho, was written after Dumbfoundead watched the 2016 Academy Awards, in which host Chris Rock, bringing three Asian children onstage, made jokes riffing on tired stereotypes. It’s an expression of his frustrations over the years as both an Asian entertainer and as an Asian American.

“Asians are looked at like the punching bag of America, the model minority who isn’t as vocal in society,” he said. “This is how I’ve always retaliated, by joining in on the conversation through [music]. I wanted anybody who’s going to say a racist joke to know that that’s tacky and tasteless and there’s going to be a response.”

And respond he did. From Iron Man to Mike Brady and, yes, even Leonardo DiCaprio winning his Oscar, Dumbfoundead’s so-called “yellow-washing” did the trick — the video went viral.

But even with Hollywood white-washing under the harsh spotlight of public scrutiny, with the lingering furor over films like “Aloha,” “Doctor Strange” and “Ghost In The Shell,” the practice continues — earlier this month, Marvel’s casting of a white actor for a character based on the role of Spider-Man friend and Korean American teenager Ganke Lee set social media alight in protest.

“I knew [“Safe”] was a good idea when me and my team were talking about it. We thought it was funny and clever, but we definitely didn’t think we would get this much support,” Dumbfoundead said. “It kind of tells you the frustration of Asian American entertainers in the business. A lot of people supported this video based on the fact that they understand the struggles of not getting your voice heard.”

We had a feeling the rapper would do things a little differently if he were actually some of the fictional characters he became in “Safe.” So we asked him:

What’s the first thing you would do as Jack Sparrow?
I would probably put the rest of the crew up on soju and just have a bunch of pirates drinking soju.

What would you say to Kate Winslet on the Titanic?
I’d be like, “You ever been to K-town?”

What artifact would you dig up as Indiana Jones?
I’d be digging up rare vinyl. I’m into collecting really rare Korean artist vinyl, like of ‘60s Korean music.

As Iron Man, who would you want fighting on your team?
Aquaman. He was always my favorite. I like fish, whales, that kind of thing. I used to have a rap crew named Swim Team, and we’d always do water themes. I was also part of a group of rappers called Thirsty Fish.

Who would you invite to your party as Jay Gatsby?
I’d invite Obama. He’s probably one of the few people who would actually leave me starstruck. 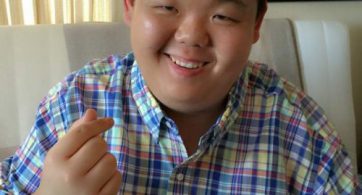 The Paul Lee School Bus Safety Law, inspired by the tragic death of Korean American special needs student Paul Lee after he was left unattended on a bus last […]