“The Incendiaries” starts off with a bang — a bombing of an abortion clinic in New England. From the jacket cover description, readers might expect R.O. Kwon’s debut novel to be a gripping thriller about an extremist religious cult tied to North Korea. But “The Incendiaries” is a slow-burning fuse, an introspective study on how quickly obsession can engulf our desire to believe in something that will transform us.

Told in fractured flashbacks, the story is mainly narrated by Will Kendall, a lapsed evangelical who transfers from Bible college to elite Edwards University. Reeling from the grief of losing his faith, Will attempts to fill his God-shaped hole by pouring his devotion into his relationship with his Korean American girlfriend Phoebe, which gradually morphs into an obsession that not only blinds him but also the reader.

Ironically, Phoebe finds fulfillment in the Christian fundamentalism Will abandons. She finds everything she desires — penitence, atonement and a noble purpose — in Jejah, an extremist quasi-Christian cult led by the charismatic John Leal, who claims to have been imprisoned in a North Korean gulag. And just as Will exploits Phoebe’s self-loathing and survivor’s guilt over the death of her mother, John Leal uses it to manipulate her into furthering his radical goals. Through the collision of these three characters’ desires, Kwon asks her readers: What does gaining or losing faith bring to our lives? How far would we go to act upon faith? And when does devotion blur into fanaticism?

Kwon’s prose is sparse yet poetic and precise in its construction. She stealthily weaves in details that capture the fabric of Will and Phoebe’s identities. Through Kwon’s characterization of Phoebe, I catch glimpses of my own Korean American upbringing and my parents’ experience — fruits peeled in a smooth, single coil; the brief humiliation of having to repeat your order at a store; taking part in a local Korean church, a haven for new immigrants yearning to belong. I hear my younger self when Phoebe rejects therapy on grounds that Koreans see it as a “failure of will.” I recognize the violence and shame Phoebe’s mother endures behind closed doors, much like the many women I’ve encountered in my community.

“The Incendiaries” is not an easy or comfortable read. Kwon unflinchingly draws back the curtains on how toxic masculinity oppresses, degrades and brutalizes women in almost every aspect of their lives. The constant shifts in character viewpoints can induce whiplash, and readers who are seeking closure and “the truth” about the enigma that is Phoebe may be sorely disappointed.

Yet, Kwon’s writing offers some comfort to those who feel unmoored after falling out of religion. Ten years in the making, the story is largely informed by Kwon’s own experiences growing up Catholic and eventually losing her faith at the age of 17. In a Goodreads interview, Kwon shared, “Losing God was devastating. I miss Him all the time. I’m starting to understand that this will never end, that I’ll keep grieving as long as I live. I wanted to put words to this absence, but I also wanted to give witness to the joy I felt back when I loved Him.” 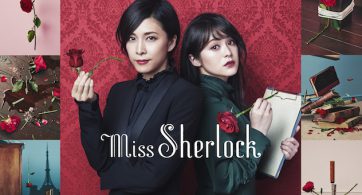 Sherlock fans, here’s something for you: “Miss Sherlock,” HBO’s first-ever original Japanese series which reimagines the iconic detective and his sleuthing partner Watson as strong women, is headed to […]