It’s in this identity crisis that Kishi Bashi’s poignant new album emerges fully formed with a quintessentially Asian American sound, voice and point of view. Since his solo debut using the Kishi Bashi moniker in 2012, the multi-instrumentalist, producer and arranger whose real name is Kaoru Ishibashi has been quietly honing his music and accumulating solid indie rock credentials, as an erstwhile member of of Montreal and with his own string of intricately layered, loop-based solo albums popular with the NPR crowd. For the inspiration behind “Omoiyari” (which means something like compassion or empathy in Japanese), Kishi Bashi turned his attention toward a painful past.

From its idyllic introductory song all the way to the album’s dramatic conclusion, “Omoiyari” is as easy to swallow as a rosé on a hot day. Sweeping string sections and lightly plucked acoustic guitar arpeggios serenade Kishi Bashi’s gentle tenor, bringing to mind James Mercer’s Beatles-esque crescendos. These stylings are particularly apparent on the cleverly titled “F Delano,” a critique of Franklin Delano Roosevelt. Everyone’s favorite New Deal president issued the notorious Executive Order 9066, which authorized the internment of tens of thousands of Japanese Americans. Kishi Bashi sings: “Into the desert he pushed all the Nips, he wasn’t alone/ Speech with a fury/ Sentenced with no plan ahead of you/ Without a heart/ No winning hand for any man or child.”

His storytelling focus brings to life varied characters from the World War II era. “A Song for You” is about a selfless American soldier fighting for the Allied side. “Angeline” is sung from the point of view of an outlaw doing hard labor in a Tennessee coal mine, far away from his true love living in the West. Kishi Bashi never says who is Japanese or who is interned. He doesn’t have to because the songs’ lyrics and sound convey a universal sense of loss.

While heartbreak is a recurring theme, emerging again on “Summer of ‘42” and his siren song “Annie, Heart Thief of the Sea,” the cultural genocide that takes place in “Theme From Jerome (Forgotten Words)” is much more powerful. At the Jerome Relocation War Camp, speaking Japanese and expressing Japanese culture was forbidden, and assimilation encouraged. A mournful violin wordlessly implies a vaguely Asian melody. Kishi Bashi sings: “After today/ We speak the new/ With every word/ You walk from the comfort of my hand.” The song expresses the fundamental conflict between immigrant generations, but when that loss in translation takes place in a swampy, malarial war camp, the stakes are much more dire.

From his fluid syncretization of American bluegrass, British indie pop, the tightly syncopated structure of looped electronic music and poetic themes of the Japanese American experience, Kishi Bashi has forged a musical portmanteau that reflects the API experience—a template, perhaps, ripe for revision and reinterpretation by future generations. 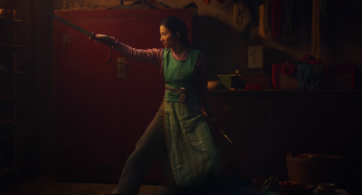 The first trailer for Disney’s live-action “Mulan” dropped last weekend, and it looks like our favorite warrior princess is getting down to some serious business. Directed by Niki Caro […]