About two-thirds of the way through Mitski’s fifth album, she makes a naked confession: “My God, I’m so lonely/ So I open the window to hear sounds of people.” It’s surprising to listen to a feeling so true and so universal in this LED-lit era of celebrity optics and political bluster, when everyone’s goal seems to be to avoid FOMO at all costs and project a well-liked personal brand on social media and elsewhere. Amid this hype and hoopla emerges the incredibly cool and honest indie singer/songwriter Mitski with an entire album devoted to an unfiltered view of her inner truth — warts and all.

Song by song, album by album, Mitski stays true to her eccentric sonic vision, honing her extraordinary ability of revealing her vulnerabilities while at the same time sounding stronger and more resilient than ever. But if there’s anyone who can master the paradox of making powerful art about personal weaknesses, it’s Mitski.

She grew up in what’s known in expat circles as a third-culture kid, meaning that she was educated in the weirdly privileged milieu of international private schools scattered across many foreign countries throughout the Middle East, Asia and Africa. Her father is a white American and her mother is Japanese. She always knew she was a little different from the other kids, but she thought that it was because she was American. But once she moved to the U.S., she realized that her quirks ran deeper than cultural identity: She was simply offbeat in any setting.

She made her singularity her calling card. She perfected her Bjork-like vocal technique and imagined original songs about life as Mitski — the isolation of being mixed race, the agony of being a girl in a white guy-dominated indie rock world, and the tedium of touring life. And she did all this as a bona fide solo artist.

With “Be the Cowboy,” she uses 14 brief yet potent songs to explore the Mitski persona, both real and invented. If the soul resides in the diaphragm, then it sounds like Mitski is singing from her soul, simultaneously gentle and strong. The album begins explosively with a jarring electronic organ on “Geyser” that jerks the listener into attention, as she sings mournfully and soulfully: “You’re my No. 1/ You’re the one I want and I’ve turned down every hand that has beckoned me to come.” You can’t help but think that this One is actually Mitski herself, the One to whom she dedicated all of her time, her art and her craft, even when it was the loneliest decision of all. In order to become a great artist, you have to put yourself first.

In “Nobody,” a lightly percussive cymbal shimmers as what seems at first listen like a conventionally uptempo pop song bubbles forth. But the lyrics stridently say otherwise: “Venus planet of love was destroyed by global warming/ Did its people want too much, too? And I don’t want your pity/ I want somebody near me/ I guess I’m just a coward/ I just want to feel all right.” And if that wasn’t grim enough, in the music video, she wakes up next to an orange on a bed, but the part of the bed with the orange quickly separates, leaving her alone on that bleak symbol of loneliness: a twin-size bed. From there, she goes out into a shiny, happy world where none of the inhabitants have faces.

On “Why Didn’t You Stop Me,” she sings over a straightforward New Wave synth chorus that evokes the early ’80s with its strobing laser sounds. Once again her lyrics are incredibly relatable for just about any girl who’s ever been in any relationship ever. “I know that I ended it but why didn’t you chase after me?”, she opines between electric guitar solos.

What’s remarkable about Mitski’s achievement as a significant presence in the indie rock scene is that she gives agency to the “Asian American woman” persona. Instead of being just another object to be fetishized or desired, she projects her own narrative truth, a point of view that is not so exotic after all. And in sharing her own pain, she makes us all feel a little bit less alone. 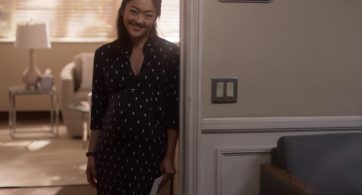 More than a year after its debut, Netflix’s “Atypical” is back for a second season. Ten more episodes will hit Netflix on Sept. 7. The series follows Sam (Keir […]