Ah, wedding season… It’s great watching all of your heart-eyed college buddies and acquaintances make plans to stick together for the long haul, but it can also be a reminder of how single you are—when you’d much rather not be. Brides, grooms and single people everywhere will surely raise a glass to this film that celebrates the highs and lows of falling in and out of love.

“Plus One,” written and directed by Jeff Chan and Andrew Rhymer, follows old college friends, Alice (Maya Erskine) and Ben (Jack Quaid), as their relationship evolves from being pals to something more complicated. After surviving a cringe-worthy wedding of a mutual friend, Ben and Alice make a deal to be each other’s plus-one to all future matrimonial events. Despite the fact that the pair spends hours traveling to various marriage ceremonies together, this is not your typical point A to point B road-trip romance. “Plus One” made its premiere in theaters, On Demand and digital HD on June 14.

Erskine is Alice a spontaneous, unpredictable, newly single woman with a slight drinking problem. Though her performance is a far cry from her “Pen15” character, Erskine’s signature brand of comedic delivery still shines through. Alice doesn’t seem to take anything too seriously and makes painfully awkward situations hilarious. Quaid plays straight man to Erskine’s antics as, the jealous “nice guy.” These two seem to have nothing in common besides being lonely and single. Sure opposites attract, but how could these two Golden State residents possibly fall in love? Especially at the after party where one constantly tries to pick up dates while the other is sloshed on the dance floor.

The pacing was broken up with heartfelt, but often wacky anecdotal wedding speeches, like the chapters of a book. They served as a sobering mental reset after the antics of each marital event. Plus, with the unique dynamic between Alice and Ben, there wasn’t a single dull moment in “Plus One.” Their playful back-and-forth banter and awkward, sexually tense scenes were comedic gold. Seriously, who orders tilapia at a diner? And with the music of indie rock band Real Estate making up much of the film’s soundtrack, “Plus One” checked all the boxes for a laid back, feel-good indie rom-com. Fun fact: Chan actually went to high school with Real Estate’s front man, Martin Courtney.

But where’s the LGBTQ representation in “Plus One?” With the increasingly progressive nature of films (and society), it was surprising that there was only one marriage ceremony between two openly gay characters. Additionally, a few scenes just seemed totally unrealistic, like when Alice gets out of a pool after jumping in with clothes on and just minutes later, her hair looks like it had been professionally blow dried. But then again, what romantic comedy is completely realistic?

Despite its shortcomings, “Plus One” is a modern indie film that can satisfy anyone’s rom-com fix in a cinch. Through inventive storytelling, ingenious comedy and a cast of talented supporting actors, the appeal of this one-and-a-half hour film stems from how emotionally invested the audience becomes in watching a frustrating and relatable friendship rise and fall into something more. Hold the over-edited fairytale photo shoot and make way for the drunken photo booth pictures! 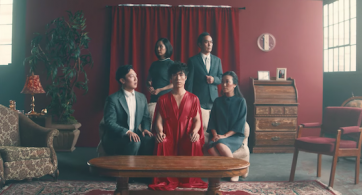 In his latest video, Eugene Lee Yang opened up about his identity as a proud gay man through the language of dance and fashion in every color of the […]