What if the Beatles and their music suddenly disappeared off the face of the planet in twelve fateful seconds? Well, say goodbye to all of those kitschy posters of John Lennon found in dorm rooms and coffee shops everywhere, because that’s exactly where “Yesterday” takes viewers.

Directed by seasoned filmmaker Danny Boyle (“Trainspotting,” “Slumdog Millionaire”), “Yesterday” operates under the premise that, due to an inexplicable global blackout, everyone on the planet forgets who the Beatles are except for struggling British musician Jack Malik (Himesh Patel). After playing the song “Yesterday” for a few of his friends (who admit they like it, but it’s no Coldplay), Malik realizes that he could claim their entire discography as his own. And he does just that. After spending a few days recalling and writing down their songs (minus a few misremembered exceptions, like “Eleanor Rigby”), Malik shoots to singer-songwriter stardom and even befriends Ed Sheeran. But throughout the movie he wrestles with the question: Is this success really his to claim?

Do you delight in the snobbishly decadent feeling of someone not knowing a band that you’re into? Well, you’re in for a real treat, because that’s the running joke of the whole film. In this sans-Beatles world, only the audience and Malik know who the Fab Four are. The film delivers a well-timed series of one liners and ridiculous situations playing off of Malik’s clandestine knowledge, like when “Hey Jude” gets changed to “Hey Dude” because Sheeran and his manager argue that “dude” sounds much more modern than the archaic “Jude.” “Saturday Night Live” veteran Kate McKinnon also makes an amusing appearance as Malik’s blunt, financially-motivated manager. The combination of a killer cast and powerful dramatic irony make “Yesterday” a fun—and funny—movie.

However, its weakness is that it is only a fun movie. Granted, the film is based on one ridiculous “what if,” but there is nothing about “Yesterday” that feels real. From the one-dimensional characters to the film’s awkward pacing and contrived sequence of events, “Yesterday” is pure, generic rom-com fantasy. “Yesterday” had the potential to delve into the effects of pop culture on the course of world history, but instead it’s just another movie about a guy trying to get the girl, with the world’s most serious case of imposter syndrome thrown in the mix. For example, in Malik’s new universe, Coca Cola has disappeared along with the Beatles. Considering the soda’s history with Pepsi and Coke’s role in westernizing the Soviet bloc during the Cold War, that seems rather significant.

Beatles purists might fret at the thought of having to listen to two hours of covers, but rest assured, Malik’s renditions of the super group’s songs are well-executed and will have movie-goers wanting to revisit everything from “Meet the Beatles” to “The White Album.” However, the songs do lose something in the Malik translation, mostly their heart. In these modern, studio-polished renditions, songs like “I Saw Her Standing There” fail to keep their compelling rough edges and become nothing more than some really good karaoke.

Perhaps the most overlooked aspect of the film also serves as its face—Patel plays a British Indian man. The significance of a brown person achieving super stardom is never explored  or once acknowledged throughout “Yesterday.” In fact, Malik being Indian isn’t even mentioned beyond meeting Patel’s very Westernized parents. This isn’t to say that every movie needs to be a grand dissertation on the subtleties of critical race theory. But the fact that it’s an Indian man who steals the music of the Beatles, a group that was heavily influenced by musicians like Ravi Shankar, seems worthy of being addressed.

At the end of the day, “Yesterday” is no more than a played-up fairytale, reminiscent of the Brothers Grimm parable, “The Fisherman and His Wife.” It’s a feel good rom-com with some catchy music, but fails to just “Act Naturally.” 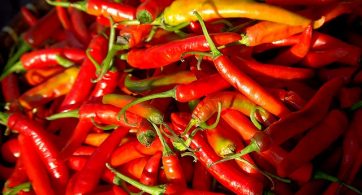 There’s something addicting about the tingling, fire-breathing sensation of spicy foods.  As the heat creeps up on you, your throat begins to sting and tears stream from your eyes. […]