Filipino cuisine is the next big thing … or hadn’t you heard? For several years running, food writers have proclaimed the “arrival” of Filipino food, but only after decades of avoidance. Most Americans, even Asian Americans, probably can’t name two Filipino dishes besides lumpia and adobo, if even that. As restaurateur Nicole Ponseca notes in her new “I Am a Filipino: And This Is How We Cook” (co-written by chef Miguel Trinidad): “for most of my lifetime, Filipino food was overlooked or treated as an afterthought.”

Food writers and cultural theorists alike have tried to explain why the third largest Asian American community has lacked the culinary presence enjoyed by far smaller groups such as Thai or Vietnamese Americans. The late food critic Jonathan Gold once suggested that Filipino flavors were too sour for American palates. Ponseca prefers to invoke the long history of colonization in the Philippines: “[Colonizers] convinced Filipinos that our food didn’t measure up.” I’d add: America’s reductive racial matrix of black, white, Asian, Latino, etc. is poorly equipped to deal with Filipino cultural and ethnic complexity. This racial ambiguity has historically rendered them–and their food–invisible.

The ambitions of Filipino American chefs, along with food media’s insatiable need to find “the next big thing,” have started to reverse this trend over the past decade. Things are hardly square now, but as Ponseca notes, Filipino food has come “out of the shadows,” and “I Am a Filipino” aims to bring in more light. As she proclaims, in bold letters, “This is not just a cookbook. It’s a manifesto,” one that aspires to “reframe the thinking” on the cuisine as “modern, authentic and relevant.” The book’s hefty 304 pages are partially grounded in what she and Trinidad serve out of their NYC eateries, Maharlika and Jeepney, and they showcase a dizzying diversity of flavors and heritages. As one might expect, there are recipes for adobos and other vinegar-heavy dishes such as dinuguan (blood stew), while a later chapter explores the Chinese influence in things such as pansit palabok rice noodles with shrimp sauce.

However, there are also chapters devoted to Spanish-Mexican adaptations like menudo (duck leg stew) and the food of the Muslim south such as baka tula-sog (beef with spiced chocolate sauce). There’s even a short “Americana” chapter at the end, focused on hybrid dishes they served at Jeepney, including banana ketchup ribs and fried chicken and ube waffles.

“I Am a Filipino” is ambitious, informative and inclusive. However, like most cookbooks written by restaurateurs, the recipes can feel a bit advanced for novices. That’s why I spent more of this summer cooking out of Marvin Gapultos’ 2013 “The Adobo Road Cookbook: A Filipino Food Journey.” A quick side-by-side comparison revealed that the same dishes by Ponseca/Trinidad often called for at least 50 percent more ingredients versus Gapultos.’ The former might yield a more robust result, but it also has a higher bar for entry.

In contrast, Gapultos’ recipes reflect how he had to learn to cook Filipino food, as a grown adult, by calling up his lolas. That led to his blog, Burnt Lumpia, and then a food truck, The Manila Machine. Appropriately, he tries to keep things accessible for his readers. As a Filipino food newcomer myself, I appreciated how easy it was to whip up adobong sili (bell pepper adobo) and arroz caldo (chicken rice porridge), and one of these days, I’ll get around to trying his slow-braised pork belly and pineapple adobo. There’s still a learning curve — hunting down calamansi limes and more varieties of vinegar than you knew existed — but his recipes never feel intimidating.

If “The Adobo Road” was Filipino cooking 101, Gapultos’ new “Pulutan!” is an elective course, focused on a different trending food craze: bar/street food. He included a short chapter on similar eats in his 2013 book, but “Pulutan!” (roughly translated as “finger food”) goes full bore. There’s recipes for everything from fried green mangoes to vinegar-poached sardines to gin, pomelo and shrimp cocktail — not to mention a dozen actual cocktails, including a cantaloupe and calamansi margarita. “Pulutan!” is a more specialized cookbook compared to both “The Adobo Road” and “I Am a Filipino”; it may not be every night that you want to whip up some avocado toast with dried hide shrimp or beer-and-Spam mac and cheese, but I’m not here to judge.

The Filipino food renaissance may be upon us, but it feels like we’re far from a peak. On one hand, at least five new Filipino cookbooks are due out this fall, but there’s still twice as many Japanese cookbooks coming soon. The upside is that it puts authors such as Ponseca and Gapultos in a rare, if also weighty, position to shape broader perceptions of the food itself. Unlike other Asian cuisines in which everyone has deeply formed opinions around their favorite dishes or “authentic” preparations, most Americans still need an introduction to Filipino food. These authors have a unique opportunity to help form those first impressions. 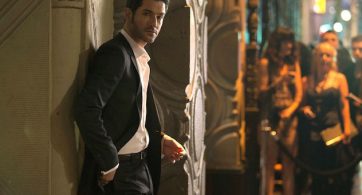 “Lucifer” is building anticipation for its fourth season with the announcement of a new angel. Vinessa Vidotto has landed a recurring role as Remiel in the fantasy drama, which […]