Romesh Ranganathan’s comedy docuseries “Just Another Immigrant” is headed to Showtime in June.

The English comedian is best known for his 2015 BBC series “Asian Provocateur,” in which he traveled to Sri Lanka to learn more about his parents’ homeland.

The new 10-episode show “follows Ranganathan as he uproots his entire family — his supportive wife, their three kids, his Sri Lankan mother and his eccentric uncle — and immigrates to the U.S.,” according to Showtime.

More specifically, the family finds itself in Los Angeles, where Ranganathan faces the challenge of selling out a venue for his stand-up show while trying to adjust to new life in America. 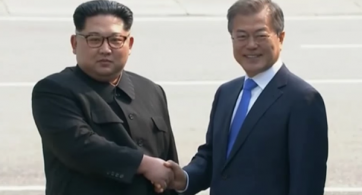 GOYANG, South Korea — The leaders of North and South Korea vowed Friday to seek a nuclear-free peninsula and work toward a formal end to the Korean War this […]