Sporting a razor-sharp, closely fitted gray suit, Ronny Chieng dribbles and moves with ease around the hoop in the parking lot of KORE in the soupy heat of Gardena, California. Effortlessly, he sinks free throw after free throw. So he’s not just a wickedly funny comedian, actor and writer, he’s a decent hoops player, too.

That’s the magic of Ronny Chieng. He makes everything look easy, especially the ego-crushing career he chose for himself: stand-up comedy. That practiced ease is how he used his legit Chinese Singaporean accent (he has a charming way of leaving out his R’s) to nail the role of Edison Cheng, Nick Young’s superficial cousin in “Crazy Rich Asians.” If you’ve seen the movie — and you better have — he plays a shallow, wealthy banker obsessed with making sure that he and his family are perfectly posed in the most flattering angle at all times.

When we asked him what was it like to be on the set of the history-making film, he said the toughest thing was — what else? — wearing three-piece suits in the tropics. “It was very hot on set,” he said. “I’m from the tropics, and I was still like, ‘This is hot.’ We all wore suits, and I thought we were all going to look like we just came out of the shower, but somehow they made it look beautiful.”

Chieng is a bona fide scene stealer in the movie, but he didn’t have nearly as much screen time as co-stars Henry Golding or Constance Wu. So Chieng spent a lot of downtime waiting around to be called, playing video games with trailer mate Jimmy O. Yang or keeping to himself and “trying not to annoy people.”

“We really try to conserve energy on set because it’s exhausting,” Chieng recalled. “You’re on the clock and you can’t relax. You don’t know what’s going on and could be called at any time. You could be waiting as long as 12 hours and then when you’re on you have to deliver. It’s really hard. You have to make sure you’re prepped and not too hungry or tired. That’s the day-to-day of movie making.”

In many ways, Chieng was born to play Edison. Like Edison, he’s a well-to-do Chinese from Southeast Asia who was born in Johor Bahru, located in the southernmost end of Malaysia, near its border with Singapore, where most of his family lives. As a baby, he moved to Manchester, New Hampshire, so that his mom and dad could study for their masters’ degrees. But after only four years, they moved back to Johor Bahru, where he spent the rest of his childhood.

“My father is very much a self-made man,” Chieng said. “His parents didn’t pay for him to go. He paid his own way and he worked multiple jobs. He basically went to college in his late 30s, after he had two kids, so he brought us along. He was a corporate executive for a long time. He worked in China for 10 years, but he isn’t from there. He’s Malaysian Chinese. But he went to China in the ’90s when China was first opening up. He was the general manager of a lot of factories there. His specialty was that he could communicate with Americans and Chinese people.”

While studying law at the University of Melbourne, he noticed that elite Asian students and wealthy private school-educated local students were encountering each other for the first time. When ABC in Australia later asked him to write a TV show, he drew on this experience that only he could tell. This show would later become “Ronny Chieng: International Student,” Chieng’s new series that debuted on Comedy Central.

“The joke on my show is that all the Asians who are sent overseas are super rich. It’s really a clash between dumb rich local people and dumb rich Asian people,” Chieng said. “Everyone is stupid, as opposed to playing like a black vs. white, victim vs. aggressor dynamic. They meet each other as equals and peers. It’s more nuanced. Asian people are not a monolith.”

Like his father, Chieng Jr. communicates to Americans, but as a correspondent for “The Daily Show with Trevor Noah,” where he eats, breathes and sleeps politics. Joining “The Daily Show” was a huge breakout moment for Chieng because it meant that for the first time in his life, Chieng would be working at a real job, something that the comedian had never done before despite his law school education.

“When they told me that I got hired, that was huge,” he said. “And I got to announce it on my 30th birthday.” When the news came, he had been performing in London and touring on a six-month stand-up tour, which he continues to do. But when he got the call, he had to immediately cancel his performance and move to New York for his first real day job.

The show’s producers valued Chieng’s unique comedic presence for its intense laugh factor. “Ronny’s a really funny, direct, hard joke kind of comic,” Steve Bodow, the executive producer of “The Daily Show,” said. “That’s a great tool for us to have. We can put him on the desk and just write jokes and jokes. And he brings a lot of that himself, too. He delivers it all like he’s angry and he’s upset. But he’s also having a good time. He’s sort of enjoying his own anger. Which is something I can’t exactly remember seeing before.”

Clearly, the comedy establishment has taken notice. The Comedy Central gig led to Chieng’s opportunity with “International Student” and the chance to perform at venerated comedy clubs.

“Getting ‘The Daily Show’ allowed me to move to New York and perform in great comedy clubs like the Comedy Cellar,” Chieng said. “It’s such an institution for stand-up comedy. I remember feeling really happy performing and being in the moment.”

In his “Daily Show” segment “Today’s Future Now,” he points out the absurdities of our rapidly changing technology and culture. In one bit, he complained about a new driverless car that features a wide screen instead of a conventional dashboard. “Driverless cars are still new technology,” he ranted. “If something goes wrong, I don’t want the last thing I see to be ‘Fifty Shades Darker.’ That’s the only movie I will be watching in a driverless car. It’s romantic and my hands are free.”

Raunchy jokes aside, Chieng takes his life’s work — making people laugh — very seriously. He prepares and hones his material relentlessly. He finds inspiration in everyday life and conflicts, like getting into quarrels at the Apple Store, and jots it down in a notebook that he carries everywhere. Then he reworks the story that it can be relatable to anyone who is listening, but not present at the original conflict. He tries the material out on audiences and then keeps tweaking until he gets it right. And how does he know when he’s got it right? He listens to his inner voice.

“My advice for young comics is you have to be aware of your material because it’s very hard for other people to give you honest feedback about it,” Chieng said. “If it doesn’t work, you have to know yourself. That’s where the talent lies.”

Back at the KORE parking lot, Chieng is done doing his best Sports Illustrated magazine photo shoot reenactment and looking for a sink to wash his now-filthy hands. Yet somehow not a strand on his head is out of place on his perfectly styled hair, which is severely parted and shellacked mercilessly to the side. He still looks every bit the well-compensated Yappie.

Although Chieng identifies as simply Chinese and not Asian American, he can relate to the plight of our people, precisely because of his international student experiences in Australia and his more recent time in New York. “Chinese people in Australia don’t have to fight as hard to live a comfortable life,” Chieng said. “Whereas in America, you have to fight so hard to survive here, to make money, people are encouraged to stand up for what they want. It’s not easy.” 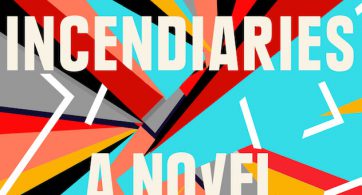 “The Incendiaries” starts off with a bang — a bombing of an abortion clinic in New England. From the jacket cover description, readers might expect R.O. Kwon’s debut novel […]