We’ve all heard the rumors, but this time it looks like they’re true— “Fresh off the Boat” will end with its current sixth season. ABC Entertainment announced today that the hit sitcom has not been renewed for a seventh season, and will conclude in Feb., 2020 with a one-hour finale episode.

“We couldn’t be prouder of this game-changing show and the impact it has had on our cultural landscape,” Karey Burke, president of ABC Entertainment, said. “The success of ‘Fresh Off the Boat’ has helped pave the way for inclusion throughout the industry… We’ll miss the Huang family, and are eternally grateful for the incredibly heartfelt stories they have told these past six seasons.”

Fans and the cast took to social media to express their feelings over the cancellation, which comes just months after Constance Wu’s now-infamous tweetstorm over the Season 6 renewal.

For those of you who are mourning the show’s loss, it’s not all over yet—a “Fresh off the Boat” spin-off, tentatively titled “Magic Motor Inn,” is still moving ahead at ABC. The main characters are set to be introduced in a later episode of Season 6, so stay tuned to catch actor Vir Das and Bollywood star Preity G. Zinta on the show. 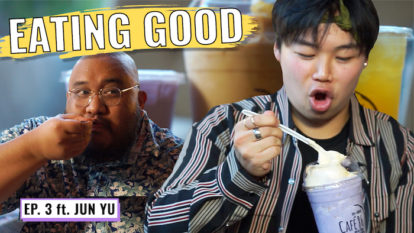 In the third episode of our “Eating Good” series, chef Ralph Degala takes “Fresh off the Boat” and “Mulan” actor Jun Yu to Pasadena’s Café 86 to learn about […]