Sendhil Ramamurthy is a self-described Luddite. According to the actor, when he first got his iPhone X, its new features baffled him so much that he went back to the store to get back an older model he’d traded in.

“They were like, ‘Sir, it doesn’t work like that,’” he recalled during an interview with Kore, shaking his head.

His co-star, Jessica Lu, remembered the day he got the phone. “You were having a meltdown,” she agreed. “‘It sees my face, it wants me to open!’”

In that sense, Ramamurthy shares very little with Paul Hammond, his on-screen persona in NBC’s new sci-fi series “Reverie.” Paul’s the engineer behind a program, called Reverie, that taps into users’ minds using brain-to-computer technology to transport them to perfect imagined worlds.

Lu plays Alexis Barrett, the CEO of the tech company behind the machine. When users inadvertently become stuck in their own heads, Paul and Alexis work with a hostage negotiator (Sarah Shahi) as she travels into individual Reveries to get them out.

The show, created by Mickey Fisher, debuted last month for a 10-episode first season. Ramamurthy and Lu discussed their characters, fear of what technology can do and what a film like “Crazy Rich Asians” means for them.

How did you become a part of “Reverie” and how did you connect to your character?

Lu: I read the script and I cried. I went into the audition and fight every bit of my personality. I didn’t want to show any of my outgoingness, because Alexis is not that at all. People at first glance will think she is really hard and rude. She harbors a lot of pain. She’s the CEO of this company, she’s young, a lot of people are waiting for her to screw up so they can take the company from her. That was my main thing, showing those layers.

Sendhil, what about Paul spoke to you?

Ramamurthy: It was a practical thing. Any time I opened a newspaper or magazine, it was all about virtual reality and A.I. Just from a practical P.O.V., I thought, it’s out there, it’s in people’s minds. You want people to talk about it, you want your show to be topical. The second thing was the character. What Mickey Fisher had talked to me about really intrigued me, that Paul was this put-together guy who is smiling and positive in the office, but that masks what’s been happening through his childhood, his relationship with his family, he suffers from panic attacks and night terrors. I thought, that’s a layered character.

In “Reverie,” users enter a fantastical world in their heads. What is an escape from reality for you in real life?

Lu: I unwind. I turn everything off. I have this backyard porch where I’ll go out and read with my cats and my dog. It’s not being glued to work or a device, being in nature.

Ramamurthy: Sports. I’m an athletic guy. Tennis, in particular. We were all asked in the writers’ meetings, what would be your Reverie? Mine was, I would play Roger Federer in the finals of Wimbledon and I’d beat him.

Do you think you would be able to leave that Reverie, or would you get stuck?

Ramamurthy: I don’t know! If Reverie existed in real life, I honestly don’t think I’d go into it. That kind of stuff scares me because I feel like it could alter your brain or something. It worries me, this kind of technology in general. Even things like the Oculus Rift, VR.

Lu: It’s already kind of happening. Mickey Fisher sent me a lot of links when we were shooting the pilot. I study Elon Musk. He was talking about Neuralink, which is a brain-computer interface (BCI) that connects you brain and your computer. It’s basically what our show is. One of the things I saw at Sundance was people who had lost the ability to walk. But if they put themselves in this virtual reality world, with the BCI, their synapses work. They’re walking as if they’re moving forward, they’re training their brain to remember how to walk. It’s helping. Everyone says technology is the worst thing. I think it is doing good as well.

That fear of technology, we see manifested in “Reverie.”

Ramamurthy: It’s a central theme of the show, in particular for my character. The Reverie program is meant for one person to go in. We have no idea what happens when you put another person in. I say, we shouldn’t have used 2.0. Now we’re going to find out what happens!

Lu: On the other spectrum, Alexis thinks that this is the next level. Like, you get to experience it with a bunch of other people in this other world. She’s always pushing. She’s always thinking, this is the future. It’s not necessarily to escape from your real life, it’s, what are you afraid of?

Jessica, this is your first series regular role. What have you learned?

Lu: This is the first time I’ve really done drama. I’ve been in dramatic shows before, but I was either the comic relief or the sarcastic friend. It was tough. The main thing about Alexis, too, is that she lost her twin. I have never lost anyone in my life, so I don’t have that to draw from. The fact that she is a twinless twin means that her life is halted. She’s moved on, but she won’t let herself really move on. Me, if someone was sad or something was uncomfortable, I would just make a joke. If something is bothering me, I will find what the problem is and I will get the help I need. But Alexis does not offer that at all.

Sendhil, have you given Jessica any advice from your many years working in TV?

Ramamurthy: As far as acting, she’s an incredibly instinctual actress. She puts in the work. She doesn’t need me to go in and screw it all up. I’m just trying to figure out my iPhone. She makes fun of me because I post these things on Instagram and I don’t crop the pictures correctly. Half the people’s heads are chopped off — she’s teaching me.

You’ve both worked behind the camera. [Ramamurthy produced the film “Brahmin Bulls” while Lu created and co-wrote the short “Pink Lemonade.”] How are you pushing toward different areas of filmmaking?

Ramamurthy: It all comes from wanting to have a bit more control as an actor. As a South Asian actor, the way to move forward is to create your own work. You have to be instrumental in that. You can’t just give that power away to other people and then complain about it. I produced a film and went to people who I knew were great writers, who were South Asian. They’re a husband-wife duo. Mahesh [Pailoor] directed. We’re working on two things right now, a TV show and a film. It came out of frustration. Bizarrely, and this wasn’t the reason I did it, it made me a better actor. The logistics of it, from looking at things from a producer’s point of view, helped me as an actor. That’s the reason why I want to do more of it.

Lu: Once you start seeing the lens not just as an actor but as a writer, director, producer, you really start to see how everything else clicks in. This short I wrote with a friend — I had just gotten fired from a job. But it was a really great thing that happened. I was at a place where I was like, I don’t want to play the token Asian anymore. It’s disheartening and it sucks. This short [“Pink Lemonade”], I wanted to play a role I’d never played before. I wanted her to be internal, filled with pain.

What are specific changes you’d like to see in the industry?

Sendhil: We need to be in decision-making positions. I’m not just talking about what actor gets what role. We need to be in more positions where you’re in control of all aspects of production. We’ve got “Crazy Rich Asians” coming out, I’d love to see that for South Asians. A rom-com with a bunch of brown dudes and a bunch of brown girls doing their thing! That’s the next step and where we should be going. I think there would be an audience for it.

Jessica: I think it’s about proving that if we have someone that is East Asian and the lead, people will show up and see it. When “Crazy Rich Asians” comes out, we flood the theaters and prove that we sell out tickets, this is something people want to watch. If people don’t show up, then it becomes, “Well, we tried and it didn’t work.” I feel very lucky that our cast is so ethnic.

Jessica: Our characters could be any race. We’re just doing our jobs, living as people. That’s what I love about “Reverie” so much — we’re just human. 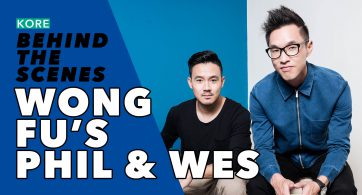 While many stories follow grand quests and heroic feats, sometimes the most creative ones are those that follow ordinary people just trying to live their lives. Here are five […]