Nora Lum, aka Awkwafina, caught the interest of feminist and Asian American audiences with her rap song “My Vag,” to the tune of 400,000 views. Her follow-up, “NYC Bitche$,” proved her no one-hit wonder. So, where does she go from here? The Chinese-Korean American artist talks about life after “My Vag.”

The relatively commonplace sight of a film shoot in New York City has not dampened the allure of maybe—just maybe!—seeing someone famous. Such was the case on a mild July afternoon on Crosby Street, in SoHo. No one even knew what was shooting, but the need to gather around all of that light and gear had blocked access to the Housing Works bookstore café, where, in a few minutes, a panel called “Noteworthy: A Conversation with Women at the Forefront of the NYC Singer/Songwriter Community” was set to start.

One of the panelists, Nora Lum, who raps under the handle Awkwafina, slunk past the crowd, unnoticed. Of the participants, Lum’s resume was probably the shortest. It’d been less than a year since she’d released “My Vag,” a playfully boastful hip-hop ode to her vagina, the video for which had enjoyed 400,000 views worth of viral fame. You could argue, though, that she was the biggest star at the panel. The flurry of songs in the interim, from “Yellow Ranger” to “Peggy Bundy” to “NYC Bitche$” to “Mayor Bloomberg (Giant Margaritas),” had been enough to net her a profile in New York magazine, as sure a sign of having made it in the city as any. The story’s race-and clique-baiting title—“Can an Asian Woman be Taken Seriously in Rap?”—seemed to be answered by Lum’s inclusion on the panel. The answer being: dumb question.

Still, before the panel, Lum, 25, looked nervous. Her shoulders hunched, she maintained safe distances from the crowd, close enough to be a part of it, but far enough to disinvite conversation. An announcement signaled the beginning of the panel. Once on stage, she looked small, and seemed to be trying to make herself even smaller.

The moderator directed a question toward Lum: Should I call you Awkwafina or Nora? Either is fine, Lum responded. The moderator commented that it was like a superhero’s double identity, and then asked Nora to explain the success of “My Vag.” And Lum proceeded to, superhero-like, transform.

“I worked at a nine to five job,” she blurted in her husky contralto, shedding her shyness in a torrent of words, and continuing apace. “And when people work a 9-to-5 job, half the time they are scouring the Internet for things like ‘My Vag.’ They are on Buzzfeed watching cats poop.” The crowd laughed, and the wisecracks kept coming, fast. Someone asked about her creative process. “Weed has something to do with it,” she deadpanned. “But not every time. For instance, like if I see a Vietnam veteran, and he smells like poo, that’ll be an idea with me, and I’ll run with that.” It’s easy to believe that it takes her no time at all to write her songs. Listening to her talk, it made sense.

When asked about her upcoming work, she mentioned her debut album, to be released in September. She added that the focus would shift a bit. “Less vag, more art,” she said. Does that mean she’s going to start writing sad songs about her childhood? Or was that a joke? There’s scarcely been a better time for a rapper to embrace her inner jester, as the boundary between comedy and hip-hop is blurrier than it’s ever been. Examples abound: SNL’s “Lazy Sunday,” Macklemore’s “Thrift Shop” or even Psy’s “Gangnam Style.” These days, humor allows rappers to sidestep the old gender, race or class questions that still inform what we think of when we think of hip-hop artists. Anyone who strings together enough OMG moments can enjoy at least a brush with fame. Albeit in its most ephemeral, Internettiest form. So there seems to be a different, and much more urgent, question at the center of Lum’s career right now, one that the “less vag, more art” quote implies, one that’s bedeviled plenty of briefly famous Internet celebrities. She’s made her splash. Now, how does she turn a viral video into a career?

Lum left the panel early to perform that night at a 20th anniversary party for BUST, the women’s culture magazine. A long list of luminaries graced the event: rapper Jean Grae, riot grrrl Kathleen Hanna, the comedian-couple David Cross and Amber Tamblyn, the recently re-formed Cibo Matto, even Gloria Steinem. The opener for the night, though, was Lum. And her nervousness had not subsided. There were too many famous people backstage, she said, so she stood by the bar, drinking a whiskey and soda slower than I had ever seen anyone drink a whiskey and soda.

“If I drink all of this, I’ll like blow up,” she admitted. She fretted about forgetting her lyrics. She fretted about how the crowd would respond. But, being at an event held by a women’s culture magazine, the conversation drifted naturally toward the old identity questions.

Lum grew up in Forest Hills, Queens. Her father is Chinese, and her paternal great-grandparents had been early settlers in Flushing, now New York City’s main Asian enclave, where they opened one of the neighborhood’s first Chinese restaurants. Her mother was Korean, from Daegu, and passed away when Lum was only 4, leaving her to be raised by her Chinese American father and grandparents. That led to an itinerant childhood, one that she describes as quite lonely. Her experience was quite different from the Asian American norm for another reason: her father and grandparents are culturally American, and speak English natively. She’s especially close to her grandmother, who was her sole caretaker for a year during her childhood, and who Lum described as her No. 1 fan.

“When I went to California, there were tons of Asian people. I did not know that. There are Asian people here, but they’re selling you Statue of Liberty crowns on Canal Street [in Chinatown],” she said. She might be underselling the Asian population of New York a bit, but it makes sense, since she is a fourth-generation Asian American. Such an identity allowed her to find music in a non-Tiger Parent way.

“My parents didn’t really push me into music at a young age as a kid,” said Lum. “So I think finding it organically helped me on the path because I know a lot of people who don’t like it anymore because their parents forced them to do it.” Her father, whom she describes as a “Chinese guido,” had musical ambitions of his own, and framed images of Bob Dylan, Townes van Zandt and other legends hang in the family home, staring down at the sampler Lum has plugged into her father’s keyboard.

Despite finding music early, the self-described nerd, musical theater nut and aficionado for the dense and ultraviolent hip-hop of artists like Necro and Ill Bill had trouble finding her place socially until she started attending LaGuardia High School of Music & Art and Performing Arts.

“I was a bad kid in junior high school, so I feel like LaGuardia definitely grounded me,” she said. “That kind of shaped me into who I am today. People were on my level.”

Lum had gotten into the arts school thanks to a stirring rendition of The Beatles’ “I Want To Hold Your Hand” on her trumpet, but quickly discovered that she did not have the motivation to compete with the other brass kids. So she cast about for other musical outlets. She wrote some songs, rap and non-rap, but she shared little with the people around her. She started dabbling with the character of Awkwafina around that time (though her stage name could just have easily been Dassani (two s’s), she said, both possibilities the result of some THC-inspired riffing). But she went on to study journalism at the University at Albany-SUNY, and after graduation, she found herself working as a publicist in the publishing industry. 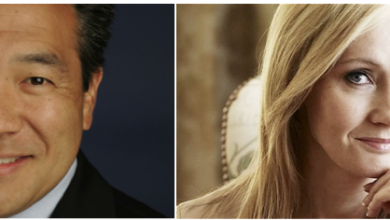 September 12, 2013 was an exciting day for Harry Potter fans. This was the day that Warner Bros. announced that they had entered into a partnership with JK Rowling […]