Massive congratulations go out to the South Korean director Bong Joon-ho for winning the prestigious Palme d’Or at the Cannes Film Festival for his commercially and critically successful film “Parasite.” Though he is the first Korean director to win this honor, he gave credit to his predecessors, such as Kim Ki-young.

Although Nicolas Cage has the starring role in the new martial arts action flick “Jiu Jitsu,” there are plenty of Asians in the cast, too, including Tony Jaa (“Ong Bak”), Rick Yune (“The Fast and the Furious”) and JuJu Chan, a Chinese American actress hailed as the “next Michelle Yeoh” in her IMDB bio. The plot? Well, the world is being invaded by aliens, but the only folks who can stand up to them are an ancient order of jiu jitsu experts. Go figure.

Speaking of martial arts, Bruce Lee’s daughter, Shannon Lee, told “Deadline” that Quentin Tarantino never received permission to use her father’s likeness in “Once Upon a Time in Hollywood,” starring Leonardo DiCaprio and Brad Pitt, with Mike Moh as the late, great film icon. She added that she holds no ill will against Moh for portraying her father, but said: “With Tarantino’s film, to not have been included in any kind of way, when I know that he reached out to other people, but did not reach out to me, there’s a level of annoyance—and there’s part of me that says this is not worth my time and my energy. Let’s just see how the universe deals with this one.”

Daniel Dae Kim has once again put on his executive producer cap! His 3AD Media company is developing “Fast Company” with Carla Ching, whose play it’s based on, for AMC Studios. Described as a dramedy by “Deadline,” it is about a family of con artists who are forced to work together. Sounds intriguing!

Disney Channel ordered a second season of its animated series “Amphibia,” which stars Brenda Song as the kind yet brave heroine Anne Boonchuy, who is magically transported to a land of slimy yet sweet amphibious friends. The creator and executive producer of the show, Matt Braly, was inspired by his heritage, family and childhood trips to Thailand. The Coalition of Asian Pacifics in Entertainment hosted a special advance screening of “Amphibia” at the Disney lot in June.

Last March, animation lovers streamed the Netflix series “Love, Death & Robots” to see a series of animated shorts that were gripping, edgy and most definitely not safe for little eyes. Jennifer Yuh Nelson, who became the first Asian American woman to direct a feature-length animated film with “Kung Fu Panda 2” and “3,” has just joined “Love, Death & Robots” as its supervising director. Will she bring a family-friendly sensibility to the show for its second season?

Ever since we sat down with showrunner Alexander Woo to talk about his new AMC show “The Terror: Infamy,” we have been waiting with bated breath to see a screener for the horror series set in World War II-era internment camps. Lucky attendees to the ATX Festival in Austin were treated to the premiere screenings, along with a Q&A that included Woo and George Takei, one of the show’s stars and its consulting producer. Just a few more months to go until the rest of us can see it.

As if Daniel Dae Kim isn’t making enough Hollywood power moves (see above), he recently signed a first-look deal with Amazon Studios for all projects produced under his 3AD Media company. Soon enough, movies created under Kim’s powerful team of creatives could be streamed exclusively on Amazon Prime in more than 200 countries. Yet again, Kim proves himself to be, as Amazon Co-Head of Television Albert Cheng succinctly said, a “creative force, with incredible success.”

Leaping from the movie industry to game development, former Disney executive Lisa Anderson is joining mobile game developer Jam City as its senior VP of Game Operations. With her wealth of knowledge on Disney and its intellectual properties, she will lead the development of a new game based on “Frozen 2,” nourishing the partnership between Jam City and Disney. 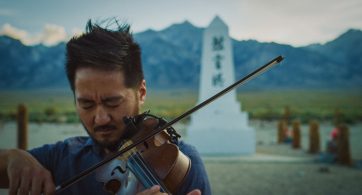