Thousands of miles across the Pacific Ocean, a warm and enthusiastic “Hi!” from 14-year-old Siena Agudong breaks the silence on the other end of the phone connection, like a wave crashing on the shoreline. Agudong is calling from her home in Kauai, where she was born. “Growing up in Hawaii is everything you dream it to be,” says Agudong, who splits her time between the island and Los Angeles so she can pursue acting.

The Filipina American actress is best known for starring in Nickelodeon shows “Nicky, Ricky, Dicky & Dawn” and “Star Falls.” She had her breakout as the chubby-cheeked Lulu Parker on ABC’s “Killer Women.” But now she’s got the title role of Nicole (who prefers to go by “Nick”) on Netflix’s family sitcom “No Good Nick.” It’s a long way from just eight years earlier, when she was following in her older sister Sydney’s footsteps playing an Oompa Loompa in a Hawaii Children’s Theatre production of “Roald Dahl’s Willy Wonka.”

When Agudong got her first taste of performing in front of a large audience, she immediately knew it was something she wanted to do again. “I used to create skits for my family,” says Agudong. “I remember we would make up fake situations, and we’d put on a play. I just knew I wanted to do it.” Agudong’s latest role on No Good Nick might surprise viewers expecting typical silly sitcom scenarios.

Agudong’s latest role on “No Good Nick” might surpise viewers expecting typical silly sitcom scenarios. The show, which dropped last April, follows the misadventures of the Thompsons, whose humdrum suburban lives are interrupted by the mysterious arrival of a teenage con artist named Nick. The main character, a supposed orphan, is old enough to know the implications of her illegal actions … right? “Nick is very layered,” says Agudong. “She loves her family, and she gets conflicted a lot. There’s a sarcastic, witty, crazy side to her that’s just like a kid, but she’s very mature as well. She does the wrong things, but for the right reasons.”

While she’s grateful to have had her start on Nickelodeon, Agudong says she feels honored to be working with Netflix. “Both are great in different ways. Nickelodeon is good to get you going, and it’s a great learning experience,” says Agudong. “With Netflix, it really feels real. It’s still weird to me that I grew up watching Netflix, and whoa, now I’m on it!”

To prepare for playing a grifter, Agudong did extensive research to educate herself on the various cons, such as the glim dropper and the money-box scheme, that serve as the titles and themes for each episode. She lets out a bubbly laugh as she recalls how motivated she was to land the role. “I wanted it so badly that I wrote in my notes on my phone, ‘I am Nicole. I am Nicole. I am Nicole. I am Nicole.’ Over and over again, until I adopted it as my name temporarily,” Agudong says. “I would think of myself as and respond to that name.”

But it hasn’t always been sunny skies and balmy weather. The competition that comes with being in a creative industry can be tough to handle. “You go on thousands of auditions, and you invest your whole heart into it,” says Agudong. “Then if you don’t ever get it, it kinda hits you: Am I not good enough?”

Agudong says she channels all of her energy into each performance, and she’s working on not taking every decision to heart. “I wish I would have realized earlier that everything happens for a reason. I’m still taking that in right now,” she says.

Although the unpredictable nature of acting can be overwhelming, Agudong says that Jim Klock, who played her character’s father in the film “Alex & Me” and who has become her mentor, taught her how to better embrace change. “He told me something I’ll never forget,” says Agudong. “Every single time before a scene, he would say, ‘All I wanna do is surprise myself.’ Whatever happens, and whatever you take in from the other actor, don’t plan things. Just be in it.” 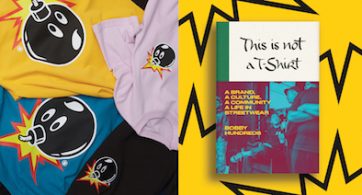 For more than 15 years Bobby Kim, who goes by Bobby Hundreds, expressed himself through his iconic streetwear brand, The Hundreds. Now with the release of his book, “This Is […]