The legislation – also known as AB-2845, or the “Safe Place to Learn Act” – seeks to address the bullying of South Asian, Muslim, and Sikh American students by providing school staff with community resources as well as requiring the superintendent to publish anti-bullying material related to religious affiliation online, according to Asian Americans Advancing Justice (AAAJ), one of the groups that supported the law.

“At the heart of this, we are providing resources for school employees, parents and students related to combating Islamophobia,” said Andrew Medina, AAAJ’s California policy manager. “This is a good first step.”

According to Medina, the coalition bill, which is backed by AAAJ, The Sikh Coalition and the Council on American-Islamic Relations (CAIR), was created to address the rising amount of bullying South Asian students face due to their religion or perceived religion.

“CAIR found that just over half of Muslim and Sikh students face bullying in California,” Medina said. “Students were reporting these issues and school employees did not know how to handle them properly.“

A recent example of anti-Muslim bullying occurred when Yasmine Nayabkhil attended sixth grade at a new school and a student pulled her headscarf off in front of everyone and tried to dissuade her from telling via threatening notes.

“This is not right,” Nayabkhil said. “I am an American Muslim, and I am so happy that this bill is being passed to help all other Muslim kids who don’t have the courage to stand up to these bullies.” 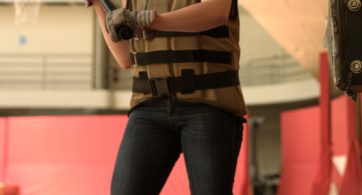 Before you become a Los Angeles Fire Department firefighter, you’ve got to train, and train hard. That’s where task-specific exercise training, which simulates actual tasks performed by firefighters, comes […]