In the picture above, foreign students of the Korean language institute Sejong Hakdang pose in front of a statue of King Sejong in downtown Seoul in order to commemorate the 568th anniversary of the Korean alphabet.

Hangul has always been a source of pride for Koreans, so much to the point that Oct. 9 is designated as a national Korean holiday for South Koreans and Jan. 15 for North Koreans.

The Korean alphabet was invented by King Sejong of the Joseon Dynasty (1392-1910) and was promulgated in 1446 to replace an older writing system based on Chinese characters in an effort to make every Korean citizen literate without years of formal schooling. With 24 characters, consisting of four consonants and 10 vowels, hangul is considered one of the most scientific and efficient alphabets in the world.

The main ceremony for Hangul Day was held at the Sejong Center for Performing Arts on Thursday morning with the attendance of 3,000 government dignitaries, foreign diplomats and leaders of Hangul-related organizations, according to Yonhap. Ten individuals were honored for their contribution to the Korean language including American missionary Homer Hulbert (1863-1949), who advocated for Korean independence from Japanese colonial rule.

The National Hangul Museum also opened to the public on Thursday after three years of construction. Nearly 10,000 hangul-related artifacts are housed at the museum including the oldest Korean typewriter in existence and the Yongbieocheonga, the first work ever to be written in hangul, according to the Korea Herald.

Meanwhile, a hangul festival kicked off Tuesday at Gwanghwamun Square in central Seoul. The festival hosted art exhibits, street performances, a fashion show, and a hangul handwriting contest for foreigners.

In addition, Seoul held an exhibition of about 50 hand-painted postcards that were chosen from a contest hosted by the city government to raise public interest in the Korean writing system. Seoul city buses will also be carrying typographic designs inspired by Hangul for an entire month starting from the holiday, according to the ministry.

Hangul Day was originally proclaimed in 1926 as an effort to preserve the written language under Japanese colonial rule, but lost its status as a legal holiday in 1991 due to pressure from the South Korean government to reduce the number of holidays. It was reinstated as a national holiday just last year thanks to the campaigning by the Hangul Society. 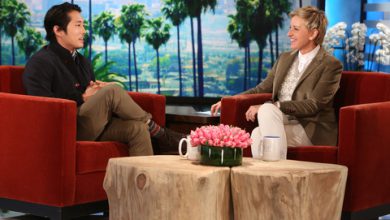 Steven Yeun recently went on Ellen as a first-time guest to promote the return of The Walking Dead. During his interview, he talked about his parents as well as […]