A South Korean man who was adopted to American parents as an infant is now awaiting his deportation from the United States in a Washington detention center.

Adam Crapser, 41, was adopted when he was 3 years old, after being abandoned outside of Seoul, South Korea. Now, Crapser will be deported to a country that is completely alien to him because his American parents never filed naturalization paperwork for him.

Crapser and his older sister were abandoned and left in an orphanage, and adopted by an American family a few months later. In their new home, they suffered frequent abuse, only to be given up six years later and separated. Crapser ended up in Oregon with Thomas and Dolly Crapser, who were also abusive.

He was eventually kicked out of the home when he was 16. When he broke into the home, attempting to reclaim the few things he had of his childhood, he was caught and pleaded guilty to burglary, serving 25 months in prison. When he got out, his troubles continued as he committed a handful of misdemeanors, including assault.

Crapser’s situation is caused by a mix of parental negligence, Congress and his own criminal history. Both of his adopted families failed to complete his citizenship papers, meaning he was never naturalized as a citizen despite living in the country nearly his entire life. He’s not alone –  according to The National Korean American Service & Education Consortium, an estimated 35,000 adoptees from outside the U.S. do not have citizenship.

Crapser was able to live legally in the U.S. under IR-4 documents. In 2001, the Child Citizenship Act automatically gave citizenship to holders of IR-4 documents, but it did not affect individuals, like Crapser, who who were already over age 18.

Another immigration law passed by Congress allows the federal government to deport noncitizen immigrant who are found guilty of “aggravated felonies,” including battery and selling drugs.

The final decision on Crapser’s deportation was made on Oct. 24. He is expected to leave in 30 days, the New York Times reports.

He leaves a wife and four kids who plan to join him in South Korea. 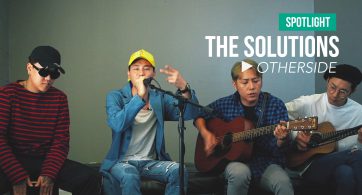 Korean indie band The Solutions, who are in Los Angeles for a tour with the concert series Carousel Live, stopped by our studio to perform their song “Otherside” for […]