Just because Apolo Ohno has retired from speed skating doesn’t mean he’s slowing down. America’s most decorated Winter Olympian has spent the past decade conquering new, less frigid arenas—from writing a new book and planning his upcoming podcast, to working as a broadcaster and traveling the world as a motivational speaker, the eight-time medalist isn’t just resting on his Olympic laurels. When he’s not orating to an audience of Fortune 100 execs or lending his wisdom as a commentator to NBC, Ohno is taking up the role of caregiver. His Japanese grandmother recently turned 100, and with a self-reliant centenarian comes certain challenges. Luckily for Ohno and fellow Asian Americans in a similar position, AARP, America’s largest nonprofit organization dedicated to empowering people 50-plus and their families, has published an AAPI-specific version of its “Prepare to Care” guidebook, a five-step resource on caring for your loved ones.

“[When] my grandfather passed, it was devastating to [my grandmother] and she questioned why she was here and how could she still live a life that’s productive,” recalls Ohno. That’s when he and his father took the first step in “Prepare to Care:” starting the conversation. Much like an Olympic sport, caregiving is much easier with a head start. Many Asian Americans often give a cold shoulder (pun intended) to awkward topics like aging and end of life, but discussing them ahead of time may curtail difficult decisions in the event of a fall, accident or serious diagnosis. AARP suggests starting small when kicking off the dialogue on caregiving. Some ideas include talking about a family friend in a similar situation, or using a cultural saying that encourages forethought, such as “youi shuutou” (“thoroughly, completely prepared” in Japanese).

While short track speed skating is a solo sport, Ohno isn’t shy about using teamwork to make the dream work. The second step in “Prepare to Care” is forming your team. Ohno’s close relationship with his father, Yuki, has been well-documented, and they’re applying their gold-medal-winning bond to caregiving. “I don’t speak Japanese. The one thing I’m grateful for is that I can use my iPhone,” he says. “Literally, it’s my dad, my grandma [and] me, and we’re having this three-way conversation. My dad’s in Seattle, I’m in Japan with my grandmother, he’s translating, [but] we’re having a real conversation, for like six hours! It’s magic!”

Ohno won season four of “Dancing With the Stars,” so he also understands the importance of being in sync. The third step of “Prepare to Care” is making a plan to ensure your caregiving team is all on the same page. It doesn’t have to be an elaborate dance routine—AARP suggests a broad course of action that keeps everyone in the loop. It’s impossible for caregivers to anticipate every potential scenario and sometimes, spontaneity is welcomed. “My grandma has a lot of anxiety, so we can’t tell her when we’re going to come or else she’ll start cleaning things that don’t need to be cleaned,” says Ohno. “She’s the type of Japanese woman that will polish something so much it would polish the paint off, just in preparation for us to arrive.”

With an entire ocean in between Ohno and his grandmother, caregiving at a distance is a must. He’s not alone, as AARP reports nearly a quarter of people caring for elderly relatives do so from afar. Finding support, “Prepare to Care’s” fourth step, is integral for times when caregivers cannot be physically present. “Because my grandmother lives in Japan, in a home where she’s surrounded by friends who are of similar age, it’s up to me to make sure my father can go back there as many times as he can to see his mom,” says Ohno. For more traditional Asian Americans, an old custom can close the gap. “[In] Asian culture in general, it’s quite common to live with the parents and grandparents. It’s something that even my fiance and I talked about,” admits Ohno. “At some point, we have no problem bringing my [dad] and her parents home. We welcome that.”

Lastly, AARP’s fifth and final step is to care for yourself. It goes without saying, but being a caregiver can be stressful and it’s important to leave time for self-care. “All families approach aging in different ways,” says Ohno. “My dad always stressed the importance of health.” After all, the speed skater is a retiree himself. These days, he’s carried his trademark swagger into his post-Olympic life, but initially, Ohno bore heavy anxieties when hanging up the skates. “In 2010 when I decided to retire, I was very afraid of what would happen if I couldn’t replace that passion. I knew I had interests and curiosities in thousands of different arenas,” he recalls. “So I took a lot of my interests overseas. I went to Asia, I started my entrepreneurship [and] I learned from people. I tried, I failed, I fell on my face, I got back up.”

Ohno brings that unflagging positive energy to his life at home. While it usually doesn’t involve a gold medal, caregiving has been a rewarding, fulfilling experience that has helped the retired Olympian put things into perspective. “When life throws things at us and we feel like that’s the most important thing of the year, [the] reality is maybe it’s not that important,” says Ohno. “Are we present, are we loving each other, are we spending time doing the things we want to do? Am I growing as a person, am I a good person? Those attributes and strengths are really great reminders when we talk to our family members.”

For more resources, go to aarp.org/caregiving and visit their Facebook page to learn more about AARP’s work within the AAPI community. 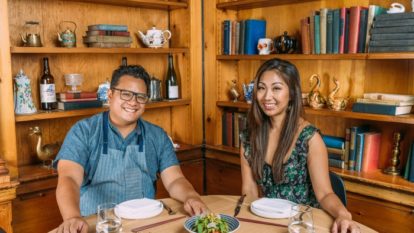 Dale Talde and Agnes Chung-Talde first met surrounded by food, at Dale’s ticketed backyard BBQ in Brooklyn, and as they say, the rest is history. But for us, the […]