Dale Talde and Agnes Chung-Talde first met surrounded by food, at Dale’s ticketed backyard BBQ in Brooklyn, and as they say, the rest is history. But for us, the rest is the cherry on top of what is quickly becoming a sought-after food experience, right next to New York’s famed Sleepy Hollow.

Dale, the Asian American chef behind the Tarrytown House Estate joint Goosefeather, grew up with immigrant parents who worked hard while still making time to show their kids what it meant to be Filipino. This translated into a progressive mindset for Dale. “They weren’t trying to manage every aspect of our lives, they let us figure it out and I thank them for that,” he says.

Likewise, food was also a major part of Agnes’ Korean upbringing. “Growing up, my family ate dinner together every night,” she says. “Our meals were always family-style, almost always Korean, and it was over those bites we shared laughs and tears. I cherished those moments.” From an early age, Agnes was encouraged by her family to not be ashamed of the way her food looked in comparison to that of her non-Asian classmates. Their reactions to her homemade dishes encouraged her fearlessness and pushed her curiosity for different cultures, which later turned  into a career in journalism and news reporting. “I really loved being in the field, meeting new people, learning new things and sharing them with others,” she says. Today, she serves up fun food stories and culinary adventures alike.

Following his success on Food Network shows like “Top Chef,” and restaurants in New York, Florida and New Jersey, Dale joined his business and life partner Agnes to build their own brand. Food Crush Hospitality represents the mixed heritage that the young couple want their food to embody. “After having partners, I realized that I need to follow and execute my vision, and not compromise my product,” Dale says. For Goosefeather, the pair’s newest restaurant, the two have returned to the roots of their mixed Asian cultures, highlighting Pinoy kamayan feasts, and focusing on locality and seasonality.

But more than food, what gets through the doors of Goosefeather is something fun and well researched. “The philosophy at the restaurant is, it starts with dope,” Dale says. “If it’s not dope, it doesn’t make it—wine, beverage, produce, fish, it all starts with a great ingredient, and then we make it fun for the guests.” Months of research goes into each recipe. The duo also pull from their travels and studying, their own eating experiences driving the menu.

While reflecting on his roots, Dale explains that his family has been his biggest support. “My mom is a fantastic cook and has an amazing palette,” Dale says. “She showed us how to grow our own food, cook for the family, take care of the household, and still work 50 to 60 hours a week.” He learned to create the more traditional foods of his background, such as pancit molo (wonton soup) and kare kare (oxtails in peanut sauce), by watching his mother and the other women of the household prepare and conceptualize meals. That process of learning by watching made Dale a more curious chef, who implements many different facets of Asian cultures into his menu at Goosefeather.

But just having a good recipe isn’t enough for Dale and Agnes, who continue to encounter obstacles in building a niche for themselves. “As Asians we have to work much harder to be thought of as leaders, if it’s our physical stature, our calm demeanor—we have to work so much harder to get recognized,” says Dale. “I was entering an underrepresented arena. As a first generation American, we really didn’t start coming into our own until we reached about [age] 30. We were working our way up the ranks, and now we’re here and we aren’t going anywhere.”

Agnes has experienced a similar difficulties, but she also emphasizes that she doesn’t want to pigeonhole herself or Dale. “Sometimes it’s an uphill battle, for example, when people think Asian people can only cook Asian food,” she says. “Dale is classically French-trained—and his Mexican and Italian dishes are amazing! But no one should feel pressure to be the torchbearer for the entire race. I just say, live true to yourself and try to make the world a better place in your own way.”

The husband-and-wife team are following their way of making the world a better place by working on some exciting new projects, including bringing back Dale’s trademark and namesake restaurant, Talde, back to New York. They also have their eyes set on branching into hotels, but won’t spoil the details just yet. Dale muses that what makes their dining experience special is the heritage behind the food. “It’s not the first course, second course, dessert,” he says. “It’s family, and the food keeps coming. That has influenced me the most.” 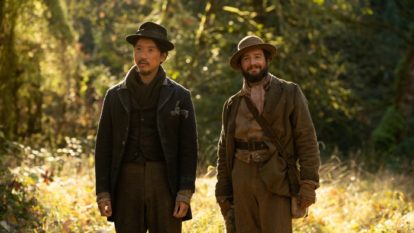 Actor Orion Lee sits in a white, minimalist room on the top floor of a swanky Los Angeles office tower. Against blue-sky views of West Hollywood, lit with soft […]