How long has it been since you grabbed one of those ubiquitous green bottles gleaming in H-Mart’s fluorescent lights?

Soju, the clear, sharp, no-frills liquor, has a notorious reputation for giving us festive nights, followed by searing headaches the next morning. After frying our brains writing too many papers in grad school, we needed a more fun and refreshing way to keep the brainfry going. Soju fit the bill and budget perfectly.

Soju, which means “fire liquor” in Korean, is a distilled alcohol traditionally made from rice, but distilleries nowadays produce it from grains, tapioca, sweet potato starches or a combination of these.

It hovers in the range of 16 to 45 percent ABV (alcohol by volume), making it slightly boozier than wine but just under hard liquors like its loaded cousin, vodka.

Because of its neutral and slightly sweet flavor, soju is meant to be enjoyed in a social setting and paired with food as a palate cleanser for some sizzling pork belly or the rich, spicy broth of a soft tofu soup. Soju does its job well.

Aside from being a great social lubricant and KBBQ accompaniment, there isn’t a unifying factor in defining soju itself. There are no standardized ingredients, nor process. One U.S. brand (Yobo Soju) is made from grapes, while a large Korean company (Jinro) has made its soju from rice, tapioca and barley for years. Very different ingredients and made in two different places, yet both are soju.

At face value, it’s an unassuming, popular liquor that has its origins in Korea. However, the history of this libation makes it more multifaceted than we know.

Soju originated in Korea when Yuan Mongols invaded the peninsula in the 13th century and introduced Persian distillation technology acquired from their marauding exploits. This tech was originally used to produce arak, a clear, grape-based liquor loved by the Persians … and Mongols, apparently. They had major outposts, and therefore distilleries, producing an arak-like liquor made from rice—our famed soju—in Kaesong, Andong, Kindo and Jeju. The term “arak-ju” is still used in Kaesong and surrounding areas.

Soju has become popular and enmeshed in everyday life throughout history, but not without turmoil. From the start of Japanese colonization in 1910, when liquor was heavily taxed and restricted, to the Korean War-era in the ’50s, when rice-based alcohols were banned due to rice shortages, soju survived because it was adapted to the times. By the same token, repressed and forgotten traditions of soju-making have also been reclaimed over the decades.

Due to the war ban on rice-based alcohols, distilleries began to use non-traditional ingredients like sweet potato to produce soju. After the restriction was lifted in 1999, some re-incorporated rice, but many continued to use alternative ingredients, hiked up the alcohol to almost 95 percent ABV, then diluted it back down with water, sugar and other additives to make it palatable. This is the version of soju we know and love (or highly dislike) today.

However, there are artisanal and regional methods of soju production that are considered an intangible cultural heritage of Korea. Places like Andong and Seoul still make traditional soju using a fermentation starter called nuruk, which is mixed with hard-steamed rice and water and left to sit in an earthenware pot for about 15 days. It’s then boiled and distilled.

These traditions, passed down through generations from mothers to daughters-in-law, unsurprisingly taste wildly different from anything in the mainstream market right now.

Aside from those mentioned above, there are commercial soju varieties that have become extremely popular with younger generations. Some of these include trendy sparkling, yogurt and fruity soju. Their packaging even looks like children’s juice boxes. Talk about dangerous!

Soju has also become the darling of the mixology world and can be used to replace vodka in cocktails, but it’s usually consumed straight as a shot.

Whichever type you happen to get your hands on, know that there is an etiquette involved in social situations. The eldest member of your crew will pour your first shot, which you must receive with two hands. Now, look away, don’t make eye contact and shoot! Your subsequent shots, should you choose to accept them, don’t have to follow this protocol.

Despite the fact that there really isn’t a consensus on what defines this widely economical liquor, we can all agree that its essential role in Korean cuisine, culture, memory and resilience is what makes soju soju. The next time you see those emerald bottles of joy (or pain) in all of their glory at H-Mart, know that there is so much more to them than meets the tongue. 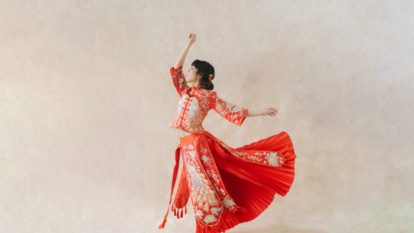 Most brides-to-be look forward to the thrill of picking out their dream wedding dresses. It’s the stuff entire movies and TV shows are made of: wading through heaping mounds […]