When thinking of music from Oklahoma, K-pop might not be the first genre to come to mind. But “American Song Contest” competitor AleXa is here to change that.

The Tulsa-born artist debuted with a performance of her single “Wonderland” on March 21, placing second in the jury ranking and moving on to the semifinals. After a competitive season, AleXa quickly became a fan-favorite across social media and advanced to the final round. She will perform in tonight’s grand final episode alongside nine other artists representing states and territories like Tennessee, Connecticut and American Samoa.

Character Media caught up with AleXa shortly before her jaw-dropping semifinals performance on April 25. She shared how she got her start in performing, her thoughts on representing K-pop in “American Song Contest” and more. “This was just an incredible opportunity, so I’m really grateful for it,” she said. “It’s absolutely crazy. I never would have imagined this would be a step I’d be taking in my career.”

AleXa also discussed her affection for her home state. Shortly before production began on “American Song Contest,” she returned to Oklahoma for the first time in four years. “The nice thing about Oklahoma is that it’s so cozy and comfortable it felt like nothing had changed,” she said. “It was just a very nostalgic, heartwarming feeling.”

Similar to “Eurovision Song Contest,” “American Song Contest” pits performers from different states and territories against one another, showcasing a diverse range of music genres and artists. Audiences have the opportunity to cast their votes for their favorite musicians, but jury choices also advance automatically. At the end of the season, one song will be selected as the winner. The series is hosted by Kelly Clarkson and Snoop Dogg.

Catch up with AleXa in our full interview above, then tune in to NBC tonight for the “American Song Contest” grand final! 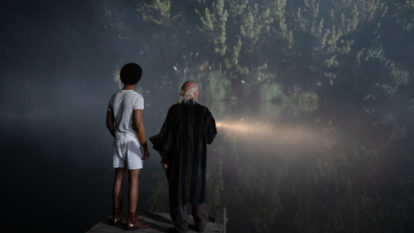 Phok shares his story of bringing some of the past decades’ most memorable thrills and chills to the big screen.