Much like the skate punk music he plays and listens to, Tim Jo likes to live life in the fast-lane with a wide array of artistic pursuits under his belt.

First noticed for playing musically inclined outcast Omar in musical rom-com “Bandslam” in 2009, Jo has continuously popped up in TV shows like ABC’s “The Neighbors,” and “This is Us.” Most recently, he’s been gracing the small screen on Hulu’s “Reasonable Doubt.”

On the streaming series, Jo plays Daniel, a nerd-turned-hottie who still can’t quite shake his dorky personality. Jo reveals his initial attraction to the project was instigated by the fact that everyone involved was also a minority. “When there’s a show being made by people of color, being run by people of color, women of color, they have me sold.”

For a while, Jo was a bit unsure of how to approach his role in “Reasonable Doubt,” but like most things in his life, he used his experience as a musician to lead the way. “I approach everything in my life as a bassist— how to support everyone in the band [with] how to support a story.” He said. “So Jax is the main character. We’re seeing all different parts of Jax’s life, her personality, her relationships, her career, and I get to offer a little bit of this light, this humor. What I bring as a character is almost more into an understanding of Jax.”

Now 38, Jo is slowly making a name for himself, he isn’t quick to dismiss his skate-punk roots which have significantly formed and shaped his multitude of creative paths and career goals. He salutes the musical genre as being one of the very first artistic outlets for him to express himself in a world that seemed to have no interest in listening to AAPI voices. “I wanted to create things, I wanted to play things that were loud, I wanted to be heard.” Jo said. “[I wanted] to enter an industry to provide a bit of representation of who I am, and who we all are.”

Jo acknowledges that, despite the obstacles that come with being a minority in Hollywood, he’s been fortunate enough to get on projects that bring much-needed representation to the screen. “Being a minority in this industry, you’re always fighting for a seat at the table.” He said. “Sometimes there are seats at the table that are given to you but it’s off to the side and it’s always the same seat. If you can give me that seat I’m gonna make it my own and try to insert what I believe is important for representation.

For more insight into Jo’s creative roots and endeavors, watch our interview above! 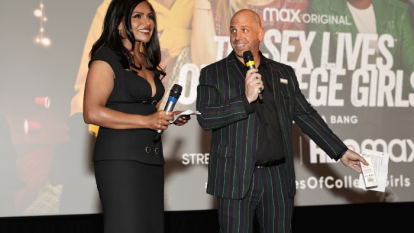 Joined by the cast, crew and creators Mindy Kaling and Justin Noble, folks gathered together to party it up for the season premiere of the HBO Max hit dramedy.