Joel Kim Booster has come a long way from telling jokes to the back of an empty bar on the East Coast. “It took about five to six months, but I’m finally living here,” Booster said over the phone from Los Angeles. The 30-year-old comedian describes swapping the accessible New York subway system for the broken Los Angeles Metro. But efficient transportation is a small price to pay for sunny skies and a big break in Hollywood.

In his debut album, “Model Minority,” Booster unapologetically challenges Asian American stigmas and stereotypes. He tells jokes about Confederate monuments, racism in the gay community and the notion that Asian Americans are submissive and agreeable.

“I’ve always bristled at the model minority myth,” Booster said. “I hate this idea that we’re all goody, straight-laced, straight-A students who never do anything wrong, … that to overcome racism and do better we have to be this crutch for white people. It’s this reductive benevolent racism in and of itself. My comedy and lifestyle are a direct reproach of that. I am certainly not a straight-A student, and I am certainly not straight-edge.”

The Booster that walks on stage is outspoken, overly confident, promiscuous and shamelessly gay—everything that the Asian American model minority is not. He artfully weaves in bits both of self-praise and reminders of his flawed personality that are the result of a sheltered childhood and an unlucky love life. It’s a type of dry, self-deprecating humor that audiences can relate and identify with, making his subversion of racist stereotypes all the more fun and hilarious.

However, Booster is not your conventional Asian American advocate. Born on the island of Jeju in South Korea in 1988, he was adopted by a strict, white, evangelical Christian couple. He was delivered “GrubHub-style” to Plainfield, Illinois, a predominantly white, cookie-cutter Chicago suburb, and was homeschooled until high school. His two older siblings are biologically related to his parents. As a result, he said he feels unable to relate to most textbook Asian American experiences.

“I may look Asian,” said Booster, “but internally, I wasn’t because I didn’t have the sort of experiences that unite other Asian Americans together, like being the children of immigrants, or being the first person to go to college. … It made it hard on certain levels to connect.”

That isn’t to say that he never made an effort to connect with the Asian community. After his parents agreed to enroll him in public school, he attempted to befriend a handful of Asian students, but quickly realized he was an outcast among them. Rice wasn’t a staple of his diet, Lunar New Year was just an ordinary day, and English was the only language he spoke at home. As far as his Asian peers were concerned, he was white.

Booster instead found himself connecting to the gay facet of his identity, something he was aware of since childhood, but chose to keep a secret. “I literally knew I was gay before I knew I was Asian,” Booster famously jokes. Consequently, he surrounded himself with girls, gay peers and theater kids.

In his senior year, Booster’s parents found his diary detailing the names of boys he hooked up with. Booster then found himself moving out of his parents’ home at 17 and ended up couch surfing until he was able to move in with a family friend.

“Coming out was sort of the catalyst to moving out,” said Booster. “I was repressed for a long time, and I didn’t have an outlet to talk about it or a support system at home to help deal with a lot of the emotional issues I was going through. … We had a really toxic relationship in my early childhood as I hit puberty. But it wasn’t just them; I don’t want to paint them as villains in that situation because they weren’t. It just ended up being the best for the both of us that I leave and take some space.”

After studying theater at Millikin University, he moved to Chicago and took on a variety of jobs to get by, all the while developing his performance capabilities. It wasn’t until 2013 that he dove head first into comedy. With a self-assigned deadline of four years to make it as a comedian, he left Chicago for New York City, performing at every open mic he could get into.

“For eight or nine years I waited hours to go up at open mics to do less than two minutes of material,” Booster said. “It’s about pushing through, for no money, no fame, no glory, and no one paying attention to it for years and years until someone finally does.”

For Booster, that moment came in 2015 when he was invited to perform at the Bridgetown Comedy Festival in Portland, Oregon. There he met his manager, Zack Freedman, who set the ball in motion for the career he has today. In addition to releasing “Minority Model” in November 2017, he’s appeared on “The Late Late Show with James Corden,” a half-hour special on Comedy Central, “CONAN” twice and participated in numerous comedy festivals throughout the country. His success has made him an icon among Asian American and LGBT communities alike.

Today his experiences have not only been the source of his standup material, but it has also greatly informed his identity as an Asian American. Booster often finds himself asking, “What are the shared experiences we have as Asian people that are not necessarily tied to a specific cultural heritage?” For Booster, the answer lies in the intersectionality of the gay Asian identity.

“Gay Asian men do have a shared experience that oftentimes is not tied to a specific ethnic background,” said Booster. “There’s a certain language and identity that has created a subculture within the larger queer culture. Example, I just got off a f-cking [gay] cruise ship and every Asian person I met on that ship was like family. It was a just look in the middle of the dance floor, and we knew what we were trying to say.”

Yet, it is within those same communities that he’s found his loudest critics. On one hand, the Asian and gay community have been excited to see themselves represented in mainstream media, Booster said. But, on the other, some have criticized him for playing into feminine Asian male and gay stereotypes. Booster said he even receives flack from gay Asian men denouncing his decision to date and be friends with white people. “I’m sort of damned if I do and damned if I don’t.”

Booster has a lot planned for himself. He has his eyes set on earning an hour special on Netflix and is anticipating the spring release of his guest-star appearance on Hulu’s Shrill, with Aidy Bryant; he’s constantly moving the goalpost. Nonetheless, he often needs to remind himself of what’s important.

“For so long, I just wanted to be able to pay my bills doing this,” said Booster, “and I can do that now. Sometimes I have to take a step back, take a breath, and be like, ‘Joel, this is what matters. You’re in L.A. doing what you love.’” Suffice it to say, he has no intention of returning to New York. 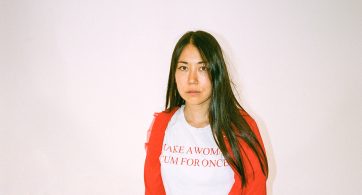 Though you might not have heard of Sasami Ashworth before, chances are you’ve heard her before. The former Cherry Glazerr synth-player has dabbled in a little bit of everything […]